BOOK REVIEW: How to be Popular by Meg Cabot 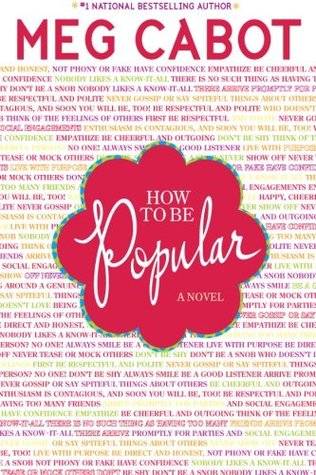 How to Be Popular by Meg Cabot
My rating: 3 of 5 stars
Summary: Do you want to be popular? Everyone wants to be popular or at least, Stephanie Landry does. Steph's been the least popular girl in her class since a certain cherry Super Big Gulp catastrophe five years earlier. Does being popular matter? It matters very much to Steph. That's why this year, she has a plan to get in with the It Crowd in no time flat. She's got a secret weapon: an old book called what else? How to Be Popular. What does it take to be popular? All Steph has to do is follow the instructions in The Book, and soon she'll be partying with the It Crowd (including school quarterback Mark Finley) instead of sitting on The Hill Saturday nights, stargazing with her nerdy best pal Becca, and even nerdier Jason (now kind of hot, but still), whose passion for astronomy Steph once shared. Who needs red dwarves when you're invited to the hottest parties in town? But don't forget the most important thing about popularity! It's easy to become popular. What isn't so easy? Staying that way.

This book was one of my childhood favorites. I stumbled across it in middle school, when I still felt cool and mature for getting books from the Teen Section™ at the library, and I must have read it at least a dozen times during those years. Even now, I still have it memorized nearly page-for-page.

But it's like literary mac and cheese -- it's not great for you, and it's a bit, well, cheesey (ba-dum-tsh), but it's so familiar and comforting that it's hard for me to to care.

I decided to give this book a reread because I've been STRESSED AF lately and I needed something fun and mindless, and that's what I got. Now that I'm older, I definitely see the story's more overt flaws (the fact that the main character SPIES ON HER BEST FRIEND UNDRESSING and this is played as a joke, the fact that the main character's best friend gets mad at her for trying to be popular WAY before she actually does anything wrong, the use of the word "r*tard" -- albeit by an unsympathetic character -- etc.), but as a kid, they went over my head.

If I read this book for the first time now, as a college student, I'd probably dislike it, but looking at it as a nostalgic fave? I still enjoyed it. There were some lines that I still found genuinely funny, and a couple side characters that were surprisingly likable (Darlene Staggs FTW). So if you want to read it, look at it as what it is -- a fluffy teen romance, plucked right from the early 2000s... with all the dated pop culture references that entails.

View all my reviews


Have you read How to be Popular? If so, I'd love to hear your thoughts in the comments! If you haven't already, feel free to follow me on social media. If you like my reviews and want to see more, please consider buying me a coffee!

Posted by Susan Mesler-Evans at 7:00 AM

Email ThisBlogThis!Share to TwitterShare to FacebookShare to Pinterest
Labels: book review, how to be popular, meg cabot, ya comedy, ya contemporary, ya romance, young adult contemporary