BOOK REVIEW: How to Experience Death for Beginners by Jessica Branton (ARC)

NOTE: This book has not yet been released. I was given an advance reading copy by MindBuck Media in exchange for an honest review. This book will be out February 14, 2019. If you wish to send me an ARC, check out this page. 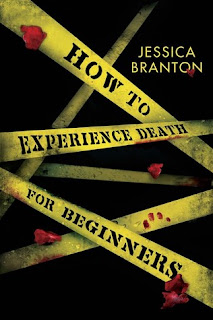 TITLE: How to Experience Death for Beginners

PLOT SUMMARY: Casey Darling is gifted (or, if you ask her, cursed) with the ability to enter the minds of people in their dying moments. She sees everything -- their joys, their sorrows, their greatest regrets. When a serial killer begins to target her small town, Casey's power causes her even more torment than normal, especially when the FBI realizes she has an unusual knowledge about the victims. Casey now must try and keep her powers from destroying her life, keep her friends and family safe, and keep herself off the suspects list.

FIRST THOUGHTS: I really thought I would love this book. If you follow my reviews, then you know that I am all about thrillers and mysteries, and come on -- just look at that title! Unfortunately, though, this book was kind of a mess. The characters were unlikable and the mystery wasn't well-executed. Overall, the basic setup is good, but there are so many factors weighing it down. (And, honestly, when I found out the now-adult author was fourteen years old when she wrote this book... Let's just say that explains a lot.)

THOUGHTS ON PLOT: For a murder mystery, this book was almost completely lacking in suspense. While Casey's powers were interesting, and the fact that she winds up working with the FBI is a great plot idea, the execution just did not work for me. (I'm not sure if the working-with-the-FBI thing is a spoiler or not. It's in the official summary on Goodreads, but it takes over half the book to get to that part -- which was also disappointing.) I never really thought that Casey or her loved ones were ever in danger. The killer does murder one of Casey's friends, but it happens so early that we barely even know her, so we don't feel the loss. In fact, we barely know any of the victims. A lot of the plot issues stem back to character issues, which I'll discuss below. In short, the fact that we didn't really get to know the killer or their victims really worked against the plot in a major way, and made it difficult -- if not impossible -- to care.

THOUGHTS ON CHARACTERS: Casey Darling is, unfortunately, one of my least favorite protagonists I've read lately. I understand that she has good reason to be stressed out, and that teenagers are extremely imperfect, but there's a difference between having a protagonist that's imperfect, and having one that's flat-out unlikable. Casey was usually the latter. To me, she came off as extremely judgmental and sometimes downright cruel -- especially to her sister Christina. Christina was also frustrating, partially because the author couldn't seem to decide what she wanted her personality to be; it seemed to change depending on what the plot needed. Cameron as a love interest and as a character was extremely bland; we don't know a whole lot beyond, "he's troubled, he has a bad relationship with his dad, and he likes Casey." The side characters were all one-note and underdeveloped -- most of them could've been cut entirely and the story would've lost nothing. In particular, I would've cut Tiffany, Phoebe, and Alex, and given their (limited) roles to Danny, since he was the only side character that did much of anything. (Unfortunately, this did not stop his personality from being extremely flat.) The school "mean girl" (whose name I've already forgotten) seemed like a very shallow Regina George imitation, and she contributed nothing to the plot.The actual killer was also a major letdown. Their lines were cliched and their personality was one-dimensional, and they had basically no motive, which just isn't interesting, let alone scary. Overall, Casey was probably the most developed character in the bunch. Even if I didn't like her, she at least had more than one personality trait.

THOUGHTS ON WRITING STYLE: One thing I will say about this book is that it is easy to read. I breezed through it, and I had no difficulty following. However, it was also bogged down by cliched dialogue, awkward sentence structure, and some really, really flat "actions." (Though as someone who can't write action for shit... I sympathize.) As mentioned above, the author wrote this book when she was fourteen, though she's an adult now. A fourteen-year-old being able to write something this long is nothing to sneeze at, and I can certainly understand wanting to revisit your old stories. But if you're gonna publish something your teenage self wrote... consider a rewrite.

THOUGHTS ON POLITICAL STUFF: Oy vey. This is one of those books where, on the surface, there's some good representation -- the main character's best friend is bisexual, a character struggles with self-harm, multiple characters have issues with depression, and the main character's sister has selective mutism. But when you get into how those things were portrayed... yeah, we got problems. I'll start obvious: Danny is a textbook example of the Gay Best Friend stereotype, which I talked about here. My problem isn't that he's campy and flamboyant; my problem is that that is all there is to him, and he rarely gets to do anything besides be Casey's BFF. I also take issue with the way Cameron's self-harming is portrayed, specifically the idea that Casey's love is enough to stop him from dong it. That's a damaging and inaccurate message to send, especially to teens who may be reading. It's true that a supportive partner or friend can help someone make strides towards their recovery, but no relationship can single-handedly fix something so serious. (This is one aspect in which I could really see that the author was fourteen when she wrote this. I myself had a simplistic, love-conquers-all view of mental illness at that age -- one that I thankfully grew out of.) Finally, let's talk about Christina. Christina is portrayed as having selective mutism, which developed after her and Casey's father died. I was interested in this, because I haven't read a mute character in a novel before, but the way it was portrayed just did not sit right with me. There were points where it felt like the other characters were treating Christina like a child -- and they're never called on this. Infantilizing disabled people is a serious problem, and you see it happen in media and real life all the freaking time. No matter how well-meaning the offender is, it's condescending, unhelpful, and outright insulting. I also really did not like how Casey would act like Christina being mute is a choice, like Christina is deliberately being difficult. While it's true that a depressing number of people do act like this towards disabled people, and Christina does call her on it a couple times, Casey doesn't ever seem to change or realize what a load of crap that is. So we're left with an extremely unlikable protagonist passing judgement on someone whose disability is poorly portrayed, which is just a waste.

FINAL THOUGHTS: As you've probably gathered, How to Experience Death for Beginners was just not my cup of tea. I'm glad I gave it a chance, and I really do think the plot had potential, but overall, it was a huge letdown. I'm glad other people like it, but I personally did not.

If you've read or plan to read How to Experience Death for Beginners, I'd love to hear your thoughts in the comments below!

A special thanks to Rebecca from MindBuck Media for reaching out to me and giving me this ARC! Even though this wasn't the book for me, I'm always pumped to have a chance to read new releases before they officially hit the shelves.

Become a Patron!
Posted by Susan Mesler-Evans at 5:09 PM