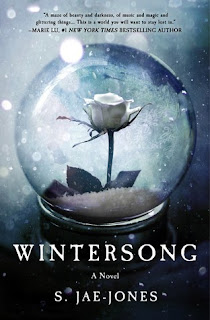 PLOT SUMMARY: Liesl's grown up hearing stories of the wicked Goblin King, and now, she's going to have to face him head-on. The King has claimed Lisel's sister Kathe as his new bride, and in order to recuse her, Lisel's going to have to journey through the enchanted Underground. Lisel has always been the responsible, protective older sister, and would do anything for Kathe... but what happens when the King becomes something other than her enemy?

FIRST THOUGHTS: I've noticed that this is a book that inspires very... passionate feelings, whether for or against. (Seriously, scrolling through the Goodreads reviews for this book is like walking through a field full of landmines.) I have a feeling that no matter what I say, I'm gonna piss someone off. So, is Wintersong good? Honestly... no. But that question is not the same as, "Is Wintersong enjoyable?" And the answer to that is, "Mostly!"

THOUGHTS ON PLOT: So the main reason I bought this book is because the plot summary had be thinking, "Labyrinth. It's Labyrinth." But that's not a criticism -- that is, after all, one of my favorite movies. I am just 100% convinced this book is the result of S. Jae-Jones watching Labyrinth as a young girl and being sad Jareth and Sarah didn't get married. (And I am completely on board. Is it a problematic ship? Yes. Absolutely. Totally. But she who is obsessed with Phantom of the Opera shouldn't throw stones.) The first half of the book is about Liesl's journey through the Underground, and I really enjoyed that part. I thought it was really creative, and I was so invested in her trials. So it was a real letdown when I got to the second half, and everything sort of started to fall apart. I will say that the second half is a good deal more original than the first, but it's also not nearly as engaging, and it's where I felt that Liesl's character started to get confused. More on that below.

THOUGHTS ON CHARACTERS: So Liesl is a... mixed bag. As a protagonist, she's easy enough to understand and relate to, but she also didn't feel very fleshed-out or relatable, and it feels like her personality does a total 180 halfway through the book. It often felt like her personality was just whatever it needed to be in order to move the plot forward, and that leads to a pretty wishy-washy protagonist. I did genuinely like the Goblin King, as well as Liesl's brother Josef, who I feel was underutilized. I just wish our heroine had had a more concrete identity, so it'd be easier to sympathize and root for her.

THOUGHTS ON WRITING STYLE: So with all my criticisms, you may wonder why I still said this book is enjoyable. Well... the writing is fantastic. The prose is absolutely beautiful, and it really does sweep you up in this enchanted, fantastical world. This is a pretty long book, but whenever I actually sat down and read it (yeah, that whole "read every day" resolution of mine? Didn't happen), I'd often read a hundred pages in one go. While there were sections that felt too wordy or too flowery, overall, I really loved Jae-Jones' writing style, and I'd be curious to see what else she's written.

THOUGHTS ON POLITICAL STUFF: This is a very vanilla story, in that there are no POC, no queer people, and no disabled people. Nothing overtly offensive, but in a world full of diverse reads, the vanilla ones are always a bit of a disappointment. I did appreciate that the story avoided pitting Kathe (the girly-girl) and Liesl (the tomboy) against each other, but since Kathe wasn't used very much, she often felt more like a stereotype than a properly fleshed-out person. The romance is... well, it's definitely not as problematic as Labyrinth (probably helps that we're not seeing adult David Bowie trying to romance a 16 year old here), but I'm not gonna lie, it has issues. But those issues didn't stop me from enjoying the book, and I did genuinely like the couple. (Again, Phantom of the Opera. Stones. Not throwing them.)

FINAL THOUGHTS: This book wasn't quite what I was hoping for, but it was a pretty fun ride, and I'd recommend it to anyone who's looking for a dark, indulgent fantasy read. I'm debating with myself on whether or not to pick up the sequel... If you've read both books and have an opinion, let me know! (No spoilers!)

If you've read Wintersong, I'd love to hear your thoughts in the comments below!

Become a Patron!
Posted by Susan Mesler-Evans at 2:56 PM