NOTE: This book has not yet been released. I was given a free Advance Reading Copy by HarperCollins and Edelweiss in exchange for an honest review. This book will be released on July 24, 2018. If you would like to send me an ARC, please see this page. 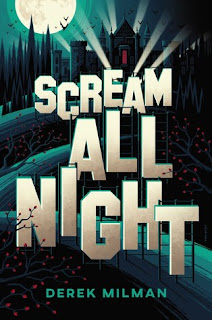 PLOT SUMMARY: It's been a few years since Dario got himself emancipated from his difficult, uncaring father, and moved out of Moldavia. Moldavia Studios is more than just a horror movie production company; all the cast and crew members live in the giant castle where the film set is, and once you enter, it's notoriously difficult to leave. After he got emancipated, Dario never intended to go back. But when his older brother Oren calls and says their father is dying and arranging his own funeral (and his own death), Dario decides to return one last time. A wrench is thrown into that plan when the will is read... and Dario finds out that his dad wants him to run Moldavia.

FIRST THOUGHTS: Even though I don't watch horror regularly -- I'm too easily freaked out by jumpscares -- I have always had a soft spot for Hammer horror films. And, as you can probably guess from that summary, this book was heavily inspired by the schlocky horror movies that Hammer created. I wasn't quite sure what to expect from this going in, but just from the concept, I knew I wanted to give it a try. I'm really glad I did; it's not quite what I was expecting, but in a good way. (I will say, though, that I think Goodreads shelving this as "horror" is a bit of a stretch. For a book that's set in a horror movie studio and begins with someone blowing up, it's not very scary.)

THOUGHTS ON PLOT: There are basically two plots going on here: Dario's family drama, and Moldavia potentially going under. I thought that the two storylines were balanced extremely well, and I liked how they both tied in to each other. And, happily, this wasn't one of those books where I heavily favored one plot over the other; they both fit perfectly, so I loved them both. The story moved along remarkably quickly, considering it covers a couple months. I'm not 100% sure how I feel about the ending, but I can't get into the details without totally spoiling it. Overall, the book has a strong hook and an equally strong execution. (I would've liked to see more of Oren's script, though; that shit was hilarious.)

THOUGHTS ON CHARACTERS: I LOVED Dario. He was hilarious, and surprisingly relateable despite his truly bizarre upbringing. I also loved his relationship with his best friend, Jude. (Jude was a great side character, and I lowkey wish he was in the book more.) Their friendship provided a lot of the book's sweeter moments in the middle of all the craziness. Oren was a mixed bag for me; he's a complete douche, but that's basically the point of his character. And he is definitely a douche with personality. I did think the love interest (whose name escapes me) was a little bland; she had a lot of potential, and some of her scenes with Dario were cute, but she sort of blended into the background.

THOUGHTS ON WRITING STYLE: This is another one of those books where I was hooked almost instantly. I got through about 90% of the book in one sitting -- the writing style is incredibly fun and easy to get into. I loved Dario's inner monologue, and a lot of his snarky comments actually made me snort out loud. My only real complaint is that I felt like the flashback scenes weren't quite as naturally sewn into the narrative as they could've been. Sometimes it felt a bit jarring, especially mid-chapter. That said, there aren't a ton of flashbacks, so it's not a huge problem.

THOUGHTS ON POLITICAL STUFF: Nothing to talk about here. There's nothing especially progressive or diverse about this story, but nothing glaringly offensive. (Obviously that's better than the political stuff being bad, but it does make it hard to fill a section...)

FINAL THOUGHTS: If you're looking for a fun, slightly dark story to devour this summer, give this book a read. I doubt I'll be the only one to fly through it. It's a great story about family, as well as a great tribute to the classic Hammer horror movies. Now, if you excuse me, this book has made me want to rewatch my favorites. (Horror of Dracula because I'm basic, and The Vampire Lovers because I'm gay.)

An extra-special thanks to Rebecca of MindBuck Media for reaching out to me and sending me this ARC! As the review above shows, I loved it, and I'm so glad I got the chance to read it before it officially hits the shelves.

Thank you so much for reading this review. If you liked it and would like to support my work, click on either of the buttons below to donate -- Buy Me a Coffee is a small, one-time donation, but becoming a Patron has several benefits and rewards. Either way, it's a huge help to me. A special thanks to those of you that choose to contribute! Even if you can't donate, you can feel free to follow me on social media; the links are in the top-right corner.

If you've read or plan to read Scream All Night, I'd love to hear your thoughts in the comments below!

Become a Patron!
Posted by Susan Mesler-Evans at 10:01 PM