BOOK REVIEW: One of Us is Lying by Karen M. McManus 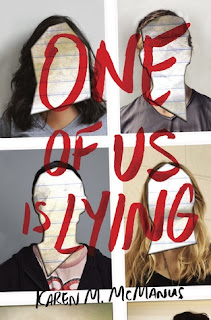 TITLE: One of Us is Lying

PLOT SUMMARY: Five students enter detention. Ten minutes later, one leaves in a body bag. The deceased Simon ran an app that spread malicious gossip about the students at his high school, so after his death is found to be a murder, suspicion turns to the four students in detention with him. Bronwyn, the geek, Addy, the princess, Nate, the criminal, and Cooper, the jock, couldn't be more different, and would never be friends under normal circumstances. But now that all four of them are being accused of killing their classmate, they're forced to band together to figure out who killed Simon... and are they being framed?

FIRST THOUGHTS: This book was a wild ride. I wasn't quite sure what to expect going in -- the summary was intriguing, so when my friend Annie told me she'd liked it, I decided to give it a go. The best way I can think of to describe the plot is Riverdale meets The Breakfast Club. It's fun, it's exciting, and it has an eclectic cast of characters to enjoy the ride with. The story had a very cinematic feel to it; it felt almost more like I was watching a movie or a TV show than reading a book. If someone's bought the adaptation rights, I haven't heard about it, but I hope somebody does soon. However, the book on its own is great, and one of the best mysteries I've read recently.

THOUGHTS ON PLOT: I thought the mystery in this book was awesome. It was one of the few YA mysteries I've read that genuinely kept me guessing all the way up until the reveal. When I did find out who killed Simon, I was shocked. I didn't think that the subplots were as good as the main plot, unfortunately. I think that's a side effect of having four viewpoint characters, each of whom has a secret -- things get real complicated, real quick, and things sometimes fall through the cracks. I also thought that the conclusion (specifically, the last chapter) was a bit of a letdown in comparison to the big twist that had come earlier. That said, the mystery was good enough that I still think it was worth my time.

THOUGHTS ON CHARACTERS: This book is very "Breakfast Club," in that each character is presented as a typical high school archetype, but then as the story goes on, we see other layers to them, and see them grow beyond the stereotype. While I liked some of the leads more than others, it was interesting to see all of them grow and mature and change. So while the characters in this book aren't always likable, they are always engaging. And they're definitely realistic. There are times when the main four act like idiots, or say things they shouldn't, or make dumb choices, but, well... ever met a teenager? Now, ever met a teenager who's under extreme stress, and is currently undergoing a traumatic event that will probably change their life forever, no matter how it pans out? Yyyyyeah. Even when I wanted to slap one of the main characters for being stupid, I always understood why they were being stupid. So I can forgive it.

THOUGHTS ON WRITING STYLE: As mentioned above, this book had an incredibly cinematic feel. Just for the hell of it, I decided to challenge myself to get through it in one day, and I did. In fact, I got through most of it in just one sitting. I have no major complaints about the writing style, though I will say that having four viewpoint characters did feel a bit crowded at times, especially since each character narrated their own sections. While all the character voices felt unique, I did think that it would've been better to have one or two narrators instead of four -- they would've been better developed that way.

THOUGHTS ON POLITICAL STUFF: Not bad, not bad at all. For the most part, this isn't a very political story, so the representation is almost entirely incidental. But that's not a bad thing in itself -- as I've said elsewhere on this blog, the idea that books need a "reason" to be diverse is nonsense. That's like saying people in real life need a reason to be gay, black, disabled, or whatever. So I was glad to see that this book wasn't entirely straight and white. That said, I have seen some criticism of how the twist was handled. I can't get too into detail without spoiling it, but I have seen some say that they think the way the book addressed the problem of male entitlement (specifically, white, straight male entitlement), is clumsy at best and outright problematic at worst. While I personally thought the way the book handled it was well-done, I won't tell you what to think. Everyone's free to draw their own conclusions.

FINAL THOUGHTS: This was a solid, easy-to-read, easy-to-enjoy mystery. If you're looking for something a little more daring than standard YA fare, I'd highly recommend it.  I think it'd make a great read for a long bus trip, or a book for when you're trying to get out of a reading slump. Judging from the reviews on Goodreads, reactions to this book and its ending are a tad... divisive, and I can sort of understand why, but I really liked it. No matter your personal opinion on it, I give this book a sold thumbs-up. It's a fun ride, with an ending you won't see coming.

If you've read One of Us is Lying, I'd love to hear your thoughts in the comments below!

Become a Patron!
Posted by Susan Mesler-Evans at 3:38 PM