Today's SnarkNotes topic is... Playing With Fire by Derek Landy! 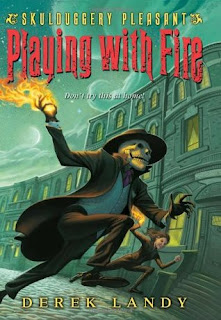 WARNING: While this review is spoiler-free, it WILL contain spoilers for the first book in the series. Proceed with caution.

If you've read Playing With Fire, I'd love to hear your thoughts in the comments below!

Become a Patron!
Posted by Susan Mesler-Evans at 5:14 PM