BOOK REVIEW: The Hate U Give by Angie Thomas 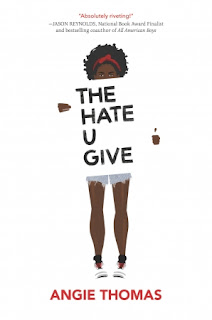 TITLE: The Hate U Give

PLOT SUMMARY: Starr's world is turned on its head when her childhood best friend, Khalil, is shot and killed by a police officer while he's unarmed. Starr is the sole witness to the crime, and at first doesn't intend to reveal she was there in order to protect her safety and privacy. However, as the mass media and people Starr knows at her mostly-white prep school slander Khalil's name, painting the officer as the victim, Starr must decide if she can find the courage to speak out, and fight for justice for her friend.

FIRST THOUGHTS: What a wonderful book to start 2018 with! I'd heard all sorts of hype for this book throughout 2017, and actually bought it the week it came out, but only got to it around December. Well, now I'm kicking myself for not starting it earlier, because this book is truly something special. It is worthy of the hype it gets, and I'm someone that suffers from "hype backlash" incredibly easily. This topped all sorts of "best of" lists for 2017, and I 100% agree -- enough that I listed it as an "honorable mention" on my own Top 10 Best Books of 2017 list, even though I was only a quarter of the way through it at that point. The Hate U Give is an incredible book, and I can't praise it highly enough.

THOUGHTS ON PLOT: As you could probably glean from the summary, this is not a book for relaxation. Right from the word "go," you're plunged into this painfully honest look at the justice system, PTSD, everyday racism, and the fight for equality. However, the story has just enough humor and sweetness added in to keep it from being unbearable. It's a heavy story, and at times, a very sad one, but it's still enjoyable to read. I also appreciated how true-to-life this book is. Without getting into spoilers, it is a brutally realistic look at police shootings, and the immediate aftermath. As much as I would love to live in a world where justice is always served, and where everyone can be expected to be treated equally by the legal system, we don't live in that world. This book reflects that, and it's all the better for it.

THOUGHTS ON CHARACTERS: This book has one of the best supporting casts I've ever read. Our protagonist, Starr, is engaging and likable, but it's the side characters that really make the book shine. I especially adored Maverick and Lisa, Starr's parents. I'd honestly read a whole book about them. Everything about them -- their interactions with each other, their relationship with Starr, their different viewpoints on the events that take place -- was just a delight to read. Starr's boyfriend Chris and her uncle Carlos were also great side characters, and they both surprised me in wonderful ways. I also really liked how One-Fifteen (the officer that shot Khalil, mostly referred to by his badge number) was mainly a background presence. He doesn't get a voice in this novel, because it's not his story. It's Khalil and Starr's. Overall, the characters are all unique, engaging, and deeply realistic.

THOUGHTS ON WRITING STYLE: The book is written in first-person, present tense; we're essentially reading Starr's internal monologue. A lot of writers don't work well with this kind of style, but Angie Thomas absolutely does. The book feels very much like the real thoughts and words of a teenage girl, especially one growing up in the 2010s. The dialogue is also sublime; each character has their own distinct voice, and I loved reading the interactions with one another. This is Thomas' first novel, and I can't wait to read what she puts out next. I know I'll be picking it up right away.

THOUGHTS ON POLITICAL STUFF: Probably the most famous and most talked-about aspect of the book. Inspired by the murders of Michael Brown, Sandra Bland, Eric Garner, and countless others, the story examines and heavily discusses the unlawful and unjust killing of black people by the police, and the tendency of the media and the justice system to allow the murderers to get away with it. If you've been following any of the deaths protested by the #BlackLivesMatter movement, you'll recognize the parallels to real life in Starr's story. Khalil, Starr, and One-Fifteen may be fictional, but this is a story that's happened to countless real people, in countless ways.

FINAL THOUGHTS: If the rest of my 2018 reading experience is even half this good... I'm in for a fantastic year. The Hate U Give is a harrowing-yet-hopeful look at police brutality and institutionalized racism in America, and I predict it'll be taught in classrooms in the future. The sooner the better; it carries a message that many people don't want to hear, but needs to be said, nonetheless. This has quickly become one of my favorite books of all time, and I'd recommend it to anyone. Seriously -- go read it.

If you've read The Hate U Give, I'd love to hear your thoughts in the comments below!

Become a Patron!
Posted by Susan Mesler-Evans at 4:31 PM