NOTE: This book has not yet been released. I was given a free Advance Reading Copy by MindBuck Media in exchange for an honest review. This book will be released on February 8, 2018. If you would like to send me an ARC, please see this page. 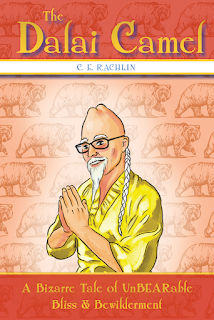 TITLE: The Dalai Camel: A Bizarre Tale of UnBEARable Bliss and Bewilderment

PLOT SUMMARY: Born to a literal camel, the Dalai Camel (or, DC, for short) is a 500-year-old, 100% enlightened spiritual leader. Of course, being the Dalai anything isn't easy, and it was an uphill climb to get to where he is today. In order to share his wisdom with the world, he is now composing his autobiography (with a bit of help from a hopelessly inept typist). In a series of vignettes, follow the DC through his very odd life, as he treads on the twisted path to enlightenment.

FIRST THOUGHTS: ...Okay. So. The publishers of this book reached out to me, and asked me to review it. It was pretty much an instant "yes" from me, since I was so jazzed to be asked. (Still am, by the way. Means a lot.) I'd never heard of the book before, so I really had no clue what to expect. Now that I'm finished, I'm left with a sense of, "What the hell did I just read?" This is an extremely strange book, and while I'm glad I gave it a go, I'm not sure I'd recommend it to anyone else. It's far from the worst book ever, and I can see why other people might like it, but it was really not for me. More on why below.

THOUGHTS ON PLOT: The summary of the book that I found online told me that this book would be... odd. But I really was not prepared. And don't get me wrong: odd can be good. Odd can be great! But my personal brand of weirdness is clearly very different from this author's, and the plot of the DC's life story really didn't hook me enough to make up for it. If I hadn't gotten this as an ARC, I probably wouldn't have finished. Luckily, this was a pretty quick read. (Though that's probably helped by the fact that I work a job where I sit at a desk and do nothing for 20 hours a week, so I had plenty of time to knock out a few chapters each day.) It may have something to do with the fact that this was told in a series of vignettes, and I'm not much into those in general, at least not in prose. I like it in theater, but that's a completely different medium.

THOUGHTS ON CHARACTERS: The Dalai Camel himself was a pretty good lead character. Which is good, since this book is literally the story of his life. He's goofy, but still pretty likable, and he helped me stick with the story. However, the supporting characters left something to be desired. (Case in point: I just finished the book and I can remember maybe... two of their names?) I think one pitfall of a story that covers such a long period of time, and is told in a series of scenes rather than an overarching plot, is that it's hard to develop a lot of characters really well. So while we had a good enough lead, the rest of the cast fell flat, at least for me.

THOUGHTS ON WRITING STYLE: Probably the biggest disappointment of this book was how underutilized the framing device was. The idea is that we're reading the DC's autobiography, as dictated to the author. I think the author could've done a lot more with this concept -- maybe had some back-and-forth between dictator and typist, thrown in some footnotes and sidebars? It did that a little, but I think the humor could've been played up a lot more. There were a couple lines that made me chuckle, but overall, the narration and writing was rather lacking.

THOUGHTS ON POLITICAL STUFF: Nothing worthy of note here. There was nothing particularly offensive or progressive about this book. I will note that I know next to nothing about Buddhism, the religion this book pokes fun at, so maybe I'd feel differently if I did. I also don't know if the author is a Buddhist, or what, if any, relationship he has with the religion. (To be fair, I don't think this book was mean-spirited in its jokes about Buddhism, and it really made fun of absolutely everyone. This was a point in its favor. Religious humor really only works if everyone's fair game.)

FINAL THOUGHTS: If I had to sum up this book in ten words or less, I'd say, "Weird, but not in a good way." I tend to like quirky, eccentric stories, but this didn't work for me for so many reasons. If you like kind of bizarre humor and are in the mood for something different, maybe give this a go, but overall, this was really not my cup of tea. Now... onto other things!

If you've read The Dailai Camel, I'd love to hear your thoughts in the comments below!

Become a Patron!
Posted by Susan Mesler-Evans at 4:00 PM