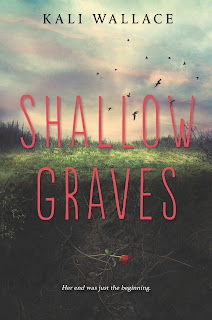 PLOT SUMMARY: Breezy Lin wakes up in a shallow grave one year after her death, with no memory of how she got there. She wanders away from her hometown, and finds that she can sense whether or not someone has killed someone -- and that she can deliver some bloody revenge in short order. As she makes her way from place to place, Breezy must decide where she'll go from here. She had her life all planned out, but that was before she died; it doesn't seem like the world has much place for a walking corpse.

FIRST THOUGHTS: This is one of those books that makes you go, "It's not bad, buuuuut..." This isn't a badly-written book by any stretch, and I enjoyed the time I spent reading it, but ultimately, my feelings towards it are pretty lukewarm. It did some things quite well, and it didn't do anything particularly poorly, but I just wasn't very hooked by it. Obviously, it held my interest enough to keep reading until the end, but it didn't pack a particularly big punch for me.

THOUGHTS ON PLOT: The plot was, for me at least, by far the weakest aspect of the book. Mostly, we just follow Breezy as she stumbles into one situation after another, some of which are connected, but most not. Breezy is very lost and aimless as a character -- which is understandable, given her situation, but doesn't always make for exciting reading. Really, I found her internal monologue to be way more entertaining than the actual plot. The conflicts in this book felt more like boss fights in a video game; obstacles to be overcome in the moment, rather than problems that weave into the overall story. I also found the ending to be wholly unsatisfying. While I will concede that it's a realistic ending (for such a fantastical premise), it's not very exciting, nor does it tie up the loose ends in a way I would've liked. I also found the worldbuilding to be disappointingly lacking. One thing I will say for it is that there was no romance in this book, which was a seriously refreshing change from most YA.

THOUGHTS ON CHARACTERS: I really, really liked Breezy. I thought she was a very realistic and deep character, and, as stated above, I found her internal monologue to be one of the best parts of the book. (If not the best part.) I liked that she was smart, levelheaded, and pragmatic, but also emotional, kindhearted, and prone to making mistakes, as we all are. I also liked the side characters of Jake and Zeke, two ghouls who eat dead bodies but are otherwise pretty nice guys. I thought they had good dynamics with each other and Breezy -- in fact, I wish the book had featured more of that. However, other side characters fell pretty flat, especially the antagonists. Violet, especially, felt like a wasted opportunity since, unlike the other antagonists, she had actual character depth and a sympathetic motive. However, she sort of vanished from the story after awhile, with no real resolution, which sucked. Ultimately, Breezy carried this book -- which makes it a good thing she's such a likable character.

THOUGHTS ON WRITING STYLE: The first half of this book was great, especially the first few chapters. I was instantly drawn in, and flew threw the first half. I just had to know what would happen next. However, after that, the writing style slowed down quite a lot, and it sort of meandered all over the place. Again, this ties into the problem I had with the book's plot. The character stuff was great -- flashbacks that served to deepen Breezy's character, her existential thoughts and fears, her theories about what she was... those were all great, and wonderfully written. But actual plot stuff? Meh.

THOUGHTS ON POLITICAL STUFF: Okay, this is where other authors should take notes. Breezy is a queer woman of color -- specifically, she's half-Chinese, and bisexual. (And I don't think this counts as the dead lesbian trope, since she's technically undead.) I liked that her sexuality wasn't a big deal, and that Breezy was open and unashamed of her identity. One of the side characters is also confirmed to be queer as well in a throwaway line. I really liked seeing representation that had nothing to do with the plot -- a common misconception is that diversity needs a "reason" to be there, but that's nonsense. Diverse people should be in fiction because, well... they exist!

FINAL THOUGHTS: Meh. I'm glad I read it, and I don't think it was a waste of time, but I won't be rereading this one. While I enjoyed some parts of this book, and I wouldn't dissuade you from giving it a go, it was ultimately underwhelming in most aspects. It set up several plot points that could've been really interesting, but it didn't follow through with them in a way that was satisfying to read about, which made for a rather forgettable reading experience.


Thank you so much for reading this review. If you liked it and would like to support my work, click on either of the buttons below to donate -- Buy Me a Coffee is a small, one-time donation, but becoming a Patron has several benefits and rewards. Either way, it's a huge help to me. A special thanks to those of you that choose to contribute!
\
If you've read Shallow Graves, I would love to hear your thoughts in the comments below!

Next on my reading list is Not Your Sidekick, but after that, it's up to my Patrons. Become a Patron and vote HERE to decide what I'll read next!

Become a Patron!
Posted by Susan Mesler-Evans at 4:20 PM