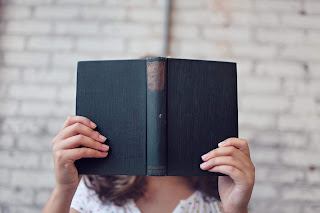 When you read as much as I do, you come across some books that just weren't worth the time. These are some books where I started the series, but for one reason or another, I don't intend on carrying on. If I come up with more titles, and people seem to like this sort of thing, I may do a part two at some point in the future.

So, without further ado, here are the series I won't be finishing.

The Raven Cycle by Maggie Stiefvater

Starting with a controversial one here! If you've read my review of the first book, The Raven Boys, you know that I just did not get all the hype for this series. Like, at ALL. I found the first book confusing at best and boring at worst, and I had a hard time connecting to the main character. I'm glad other people enjoy it, but I just did not.

The Hunger Games by Suzanne Collins

I'll be the first to admit that I probably read this book a little too young. I was twelve -- and I think the book would be perfectly fine for a lot of twelve-year-olds, but not me. A lot of the deeper themes flew over my head, and while I liked the first book okay, I wasn't interested in the second. And, I'm still not. I admit this is partly sheer stubbornness, since back when the first movie came out, it seemed like everyone was obsessed with these books. (The quickest way to make me refuse to give something a second chance is to tell me I'm wrong for not liking it.)

The Program by Suzanne Young

The first book was... eh. I thought the premise for a dystopian world where suicide is a national epidemic was interesting and unique, but by the end of the first book, every character I actually liked was dead or worse. I wasn't drawn into the world or story enough to care to continue.

Dorothy Must Die by Danielle Paige

A grimdark take on the land of Oz gone seriously wrong. I was apprehensive about this one from the start, since Dorothy Gale is one of my favorite fictional characters of all time, and this series makes her the main villain, something even Wicked, the OTHER grimdark Oz book, did not do. Still, I gave it a fair chance, or at least tried to, and was utterly disappointed.

Okay, so I did not expect this book to be great literature. (I mean... look at the title.) But it wasn't nearly fun or entertaining enough for me to just roll with the silly premise, and I found the main character's love interest to be utterly insufferable. Also, if you have a book about Jack the Ripper, and I don't even care who the Ripper is... that's a bad sign.

I read the first book in this series, Confessions of a Murder Suspect, and... everyone was a jerk. Everyone. By the end of it, I didn't even care who did it. I found the main character to be unrelatable and boring, and I don't think this book needed a sequel. Much less three.

The main character of this book was an insufferable, misogynist creep. Why would I read another book of that?

The Selection by Kiera Cass

I didn't even make it through the first book. A lot of people have called this series a guilty pleasure, and I can see why others enjoy it, but it didn't work for me. Guilty pleasures need to be equal parts fun and stupid, but this was mostly just stupid. (No offense to anyone that liked it! It was just not my thing.)

The Outliers by Kimberley McCreight

Another first entry I reviewed for this blog, though that one was a bit more scathing than the one for The Raven Boys. I really enjoyed McCreight's Reconstructing Amelia, so I was disappointed that this book failed to grab me the way that one did.

This is another "it's not you, it's me" entry. I thought the premise was really cool, and I especially loved all the photos that were included in the narrative, but it just didn't grab me well enough for me to carry on. Life is too short to spend on series you're not invested in.

Thank you so much for reading this list. If you liked it and would like to support my work, click on either of the buttons below to donate -- Buy Me a Coffee is a small, one-time donation, but becoming a Patron has several benefits and rewards. Either way, it's a huge help to me. A special thanks to those of you that choose to contribute!

What are some series YOU won't be finishing? Tell me about them in the comments below!

I should also note that I put the book I was reading, Three Dark Crowns, on the backburner. I didn't officially declare it a DNF since I do want to get back to it someday, but I just was not getting into it, at least, not right now.

Become a Patron!
Posted by Susan Mesler-Evans at 8:17 PM

Email ThisBlogThis!Share to TwitterShare to FacebookShare to Pinterest
Labels: rant