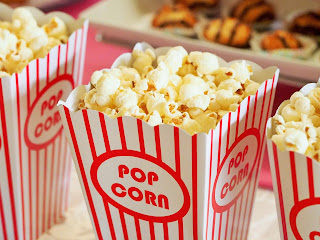 Finding new books to read can be hard, especially if you already have an idea of what you like. Here are ten popular movies, and a book you might enjoy if you liked it! 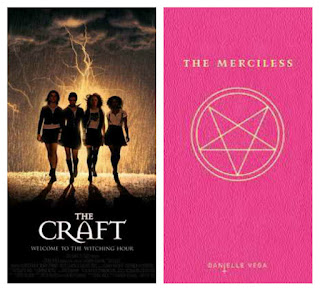 THE MOVIE: Sarah, a telekinetic teenager, moves to a new town, and is taken in by a clique of girls with a dark secret: they're witches. After a ritual grants the girls great power, the consequences soon become more than Sarah bargained for.

THE BOOK: Sofia is new in town, and is relieved when a trio of popular girls take a liking to her on the first day. However, when her new friends decide that a fellow classmate is possessed by the Devil, Sofia finds herself in over her head.

THE OVERLAP: The Merciless could almost be viewed as The Craft in reverse. Both are supernatural stories focusing on interpersonal conflict and violence in a group of girls, with a touch of gothic horror. 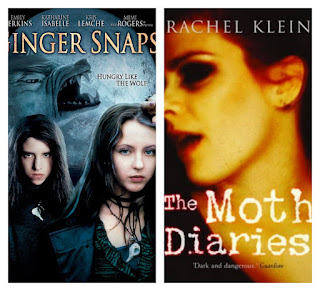 THE MOVIE: Brigitte's best friend in the world is her older sister, Ginger. The two girls are outcasts for their obsession with the macabre and deadly, and only have one another. When Ginger gets bitten by a werewolf and undergoes radical personality changes, it's up to Brigitte to find a cure and save her sister from herself.

THE BOOK: An unnamed narrator is a student at a repressive, restrictive boarding school for girls. Although the school is strict and uncaring, the narrator sees it as a refuge from her tempestuous homelife, especially because of her friendship with a girl named Lucy. The status quo is interrupted by the arrival of a mysterious new girl, Ernessa, who takes an interest in Lucy and slowly causes the narrator to be overcome with paranoia. Is the narrator lost in her own head... or is Ernessa really a vampire? 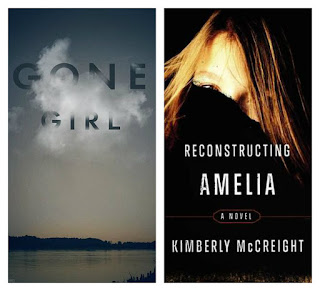 THE MOVIE: Nick Dunne finds himself as the primary suspect when his likable, beautiful wife Amy goes missing. As he attempts to clear his name, we find out he's been keeping more secrets than he can keep track of. We're also shown flashbacks to before Amy went missing, but there are hints that something's been left out.

THE BOOK: Kate is heartbroken when her teenage daughter Amelia dies suddenly, from falling off the roof of her exclusive private school. Amelia's death is officially ruled as a suicide, and Kate has no choice to accept it -- until she gets a text message from a blocked number that reads, "Amelia didn't jump."

THE OVERLAP: Dark and addicting thrillers, with more plot twists and unreliable characters than you can shake a stick at, focusing on the ways people manipulate and lie to each other for the sake of appearances. 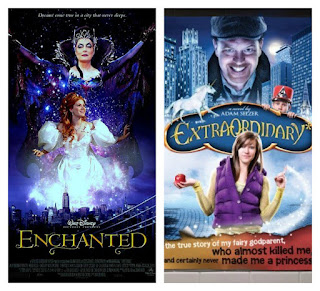 THE MOVIE: Giselle is the archetypical Disney princess... who's just fallen into modern-day New York City. Giselle must find a way home, while at the same time learning how to navigate the real world, where you can't just burst into song, and where dreams do not always come true.

THE BOOK: Everyone knows the story of how Jennifer Van Den Burg's life was changed forever by the sudden arrival of her fairy godmother, who made her a princess and hooked her up with the man of her dreams. However, it's just that: a story. Jen is now setting the record straight -- starting with the fact that her "fairy godmother" was a creepy, unpleasant man who had a nasty sense of humor and a murderous streak a mile wide.

THE OVERLAP: Hilarious fractured fairy tales that mercilessly make fun of the standard Disney formula, while at the same time paying tribute to it. 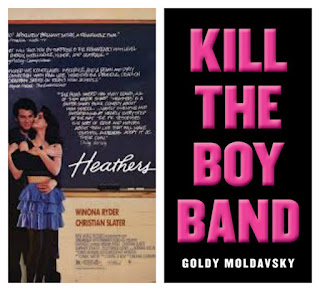 THE MOVIE: Veronica is an unhappy member of the school's popular crowd, who falls hard for a rebellious new boy named JD. But when the bodies start piling up, Veronica realizes that JD isn't so much a mysterious and disaffected loner, and more of a murderous psychopath. One that's hopelessly in love with her.

THE BOOK: Four teenage girls are bonded by one thing: their favorite boy band, The Ruperts. They rent a room at a hotel where the band is staying, all in the hopes of meeting them. But one thing leads to another, and soon, they've got a member of the band in their room... tied to a chair against his will. (And on top of that, he's the lamest member by far.)

THE OVERLAP: Dark and hilarious satires of modern (or then-modern) culture, featuring gloriously messed up leading ladies and unhealthy relationships.

6. Shakespeare in Love -- My Lady Jane 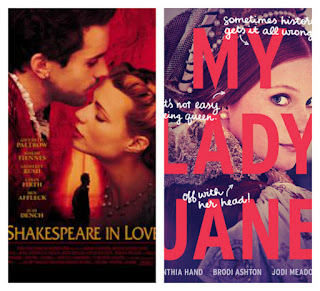 THE MOVIE: William Shakespeare has writer's block, and can't seem to finish his latest masterpiece -- the beginnings of what will later become Romeo and Juliet. Viola de Lesseps, meanwhile, is enthralled with Shakespeare's work, and disguises herself as a man so she can audition for his next play. William soon discovers the truth, and the two begin a secret affair.

THE BOOK: Lady Jane Grey has three problems. One: she's been married off against her will to a man she barely tolerates. Two: said man turns into a horse at night. And three: she's about to become Queen of England. Not that she knows that yet. The historical Lady Jane was queen for nine days before being executed, but there's no reason the facts need to get in the way of a perfectly good story.

THE OVERLAP: Lighthearted romances that take place in history, and make a brief nod to it before chucking it directly into the trashcan, for the sake of humor but also the Plot. 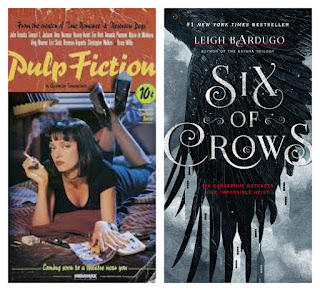 THE MOVIE: Three stories, centering around two assassins, a boxer who's in hot water with the assassins' boss, and a holdup at a diner gone seriously awry, told out of order. Darkly hilarious and bloody, featuring some of the most iconic lines and characters in film history.

THE BOOK: A thief, a spy, a magic-using refugee, a sharpshooter, a runaway, and a convict are forced to team up to pull off an impossible heist. If they succeed, they'll be rich beyond their wildest dreams. If they fail, they die, and the consequences for the world at whole will be unimaginable. No one expects the Crows to survive, much less succeed, but their leader has an unmatched talent for doing the impossible. And as it turns out, pulling off this heist will be easy in comparison to controlling his crew.

THE OVERLAP: Complex and potentially confusing thrillers, focusing on a group of likable ne'er-do-wells. Funny and clever, and worth the extra time it takes to get through them. 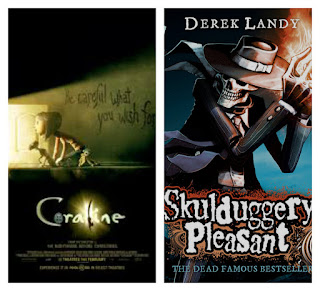 THE MOVIE: Unhappy to have been moved to a new town, Coraline discovers a secret doorway in her bedroom, which leads to a magical world. The Other World is bright, beautiful, and full of people that adore her -- but once she's there, Coraline's Other Mother isn't too keen on letting her leave...

THE BOOK: Following the death of her uncle, Stephanie Edgley meets Skulduggery Pleasant, a sarcastic but likable man with a mysterious past. When Stephanie finds out her uncle was involved in a world of magic and danger, she insists on being taken along. Which Skulduggery does. Reluctantly. (Oh, and did we mention that Skul is a walking, talking skeleton?)

THE OVERLAP: Spooky and unnerving stories for children, where an ordinary girl is thrown into a fantastic world. Both feature the sort of humor and scary moments that make you wonder if it isn't more for the adults. 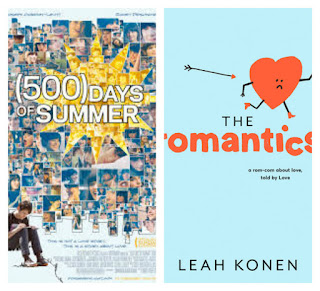 THE MOVIE: When Tom meets Summer, he's convinced that she's perfect, that they were brought together by destiny, and that Summer is his soulmate. These are the 500 days it took for him to realize he was wrong... on all those counts.

THE BOOK: Love has a plan for everyone... but they can't stop you from screwing it up. Gael is absolutely crushed when he finds out his girlfriend is cheating on him with his best friend. Crushed enough to do something drastic like chase the first girl he meets afterwards. In this love story, narrated by Love itself, Gael attempts to navigate his heartache, while dating the wrong girl. (Cue the sounds of Love screaming in frustration in the background.) 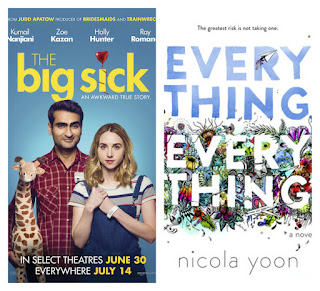 THE MOVIE: Kumail is an aspiring standup comedian who meets and falls in love with a woman named Emily. He hides their relationship, since his parents would disapprove. This hurts Emily, and she ends the relationship, only to be taken to the hospital soon thereafter with a serious illness.

THE BOOK: Maddy hasn't left her house in eighteen years, due to an illness that makes her literally allergic to the outside world. She only ever sees her mother and her personal nurse, and has no friends. That is, until Olly, a boy about her age, moves in next door, and the two begin secretly texting and exchanging notes.

THE OVERLAP: Dramedies focusing on a romance between two very different people, one of whom is deathly ill. Bittersweet, but still lighthearted and enjoyable.

Thank you so much for reading this column. If you liked it and would like to support my work, click on either of the buttons below to donate -- Buy Me a Coffee is a small, one-time donation, but becoming a Patron has several benefits and rewards. Either way, it's a huge help to me. A special thanks to those of you that choose to contribute!

I'm thinking of making this sort of "If You Like X, Try Y!" column a regular feature on this website, so if you enjoyed it, please let me know! And if you have any ideas for future pairs, themes, or rec lists I should do, feel free to suggest them.

Become a Patron!
Posted by Susan Mesler-Evans at 5:19 PM