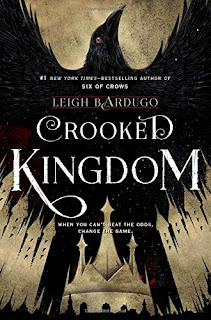 DISCLAIMER: This review will contain spoilers for the first book in the duology, Six of Crows. If you haven't read that book and wish to go in unspoiled, stop here.

PLOT SUMMARY: Kaz Brekker and his crew have just pulled off a heist no one expected them to survive, but the trouble's far from over. First, the man that hired them never intended to pay them what they were promised. And now, he's kidnapped Inej, Kaz's second in command, and is holding her hostage until Kaz hands over the secret to parem, the magic-enhancing drug that could destroy life as they know it. Kaz, never one to take this kind of disrespect lying down, has a plan to destroy their foe's entire life, brick by brick, until he rues the day he ever went back on his end of their deal. But getting Inej back will be the easy part...

FIRST THOUGHTS: A great followup to Six of Crows! Among all the rave reviews for this duology, one sentiment cropped up over and over: "Both books are good, but the second one is better." Now that I've read both of these massive tomes almost back-to-back, I have to agree. It's a great followup, one of the few that manages to surpass the first.

THOUGHTS ON PLOT: While the first book was a straight-up heist story, the grand plan for this book can be summed up in two words: "Burn. Everything." (Okay, Kaz's master scheme is a little more complex than that, but still.) As a lover of revenge stories and a noted supporter of burning things, I enjoyed this book's plot even more than the original. I also found this one to be a bit easier to follow, but maybe that's because I was more accustomed to the world in which its set. I also liked the ending much better, and I thought that the story's conclusion was fitting. It completes the story and leaves the reader satisfied, but still leaves plenty of openings for future installments, whether they include Kaz and his crew or not.

THOUGHTS ON CHARACTERS: The six leads from the first book are back, and better than ever. It was interesting to see how all the characters have developed from the start of Six of Crows, and how they continued to grow throughout Crooked Kingdom. I also really liked the side characters introduced in this book, especially Jesper's father, a much-needed compassionate adult in this series. (Seriously, for all the stealing, lying, and murdering our protagonists do, they're all like eighteen at the outside.) I also appreciated how much better developed the series' villains are in this book compared to the last. Don't get me wrong, they're still evil, but we also get a better sense of their personalities and motivations, which serves to make them seem much more real, and by extension, like a much more serious threat. There is one major character death in this book, and while it wasn't quite in make-you-cry territory, it was an unexpectedly powerful punch to the gut. (Especially considering I accidentally got the death spoiled for me before I started reading!)

THOUGHTS ON WRITING STYLE: Nothing to add from the last review. Bardguo is still a really talented author, and I really enjoyed reading her prose. (I also appreciated that she added a list of all the characters at the back -- I needed it.)

THOUGHTS ON POLITICAL STUFF: I have no notes to add from the last book -- at least, none that wouldn't get spoilerish. This is one of the most diverse YA books I've ever read, and just like its predecessor, it manages to avoid the traps of stereotyping its minorities. Disabled people, abuse survivors, POC, and queer people alike all get a turn in the spotlight. As I mentioned in my review of Six of Crows, I hope that other YA authors follow Bardugo's lead, especially since this book is as popular as it is.

FINAL THOUGHTS: I'm really glad I took the time to read this series. While I will note that it is a bit overhyped (as popular books tend to be), it's well worth the read. I'd love to see it get adapted into movies or a series -- I think Neelam Gill would make a perfect Inej. I'm looking forward to reading The Grisha Trilogy, Bardugo's other series set in the same universe. In fact, I already own the first book, so look forward to seeing reviews very, very soon.

If you've read Crooked Kingdom, I'd love to hear your thoughts below.

Become a Patron!
Posted by Susan Mesler-Evans at 12:58 PM