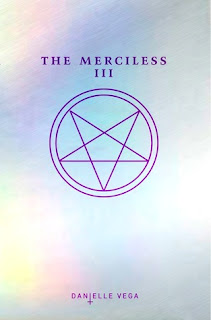 PLOT SUMMARY: All Brooklyn wants to do is help people. So, when she gets an anonymous call on her helpline, she decides to look into it when the police fail to follow up. Her search for the truth draws her into the social circle of Christ First Church, especially the pastor's friendly, intense son, Gavin, and his rebellious daughter, Hope. But the closer Brooklyn gets to Gavin, the harder time she'll have breaking away... and she doesn't have a clue what's in store once she gets in too deep.

FIRST THOUGHTS: The Merciless series is back, baby! I raved about the first book, so when the second entry of the series was such a disappointment, I was worried about this one. But I'm so glad I decided to stick with it. There's no official word yet as to whether there'll be a fourth book, but I really hope there will be -- there are way too many directions this series could go, and way too many unanswered questions for the story to stop here. While I still enjoyed the first entry in the series the most, this third novel, a prequel story, was a huge step up from the second, and I'm very optimistic about the future of the series.

DISCLAIMER: THIS REVIEW WILL CONTAIN SPOILERS FOR THE FIRST TWO BOOKS IN THE SERIES. READ THOSE FIRST BEFORE PROCEEDING.

THOUGHTS ON PLOT: I was really excited once I heard that this book would be a prequel; specifically, detailing the events of how Brooklyn became possessed by the Devil. It's not a prequel you can read before the other parts of the series -- it'd be understandable, and still a pretty good book, but having the full context of the story is what really makes it work. It's amazing how much tension Vega manages to draw out of the plot, despite the reader knowing from the start what's going to happen. You already know what the finale holds, and yet you actively dread it, and hope that somehow, the unhappy conclusion will be averted. There is a romantic subplot, but unlike the first book, it's actually vital to the main plot, which was a nice surprise. I did groan when I realized it was a love triangle, but it wasn't quite as bad as some other ones I read.

THOUGHTS ON CHARACTERS: Brooklyn is my favorite character in The Merciless series, so I'm happy to report that this book really did her justice. I like that her pre-possession self is still recognizable as her post-possession self, and yet so different. She's not all sweetness and light, and you see that darkness lurking within her, and yet she's still so, undoubtedly good. Part of what makes the story work so well is the tragedy of it all; we know we're going to have to watch as this good, genuinely kindhearted person slowly slips into evil, and there's nothing we can do to stop her. I was also really pleased to see Riley from the first book again; she's not quite the freakshow we know just yet, but give it time. Part of the fun of prequels is seeing flashes of the characters' future selves, and we definitely get that here. Riley isn't quite as present as she was in the first book, but her appearances serve to deepen her character in a surprising way. (A way that I think would be lost on a reader who hasn't already read the first two books.) Gavin and Hope are both delightful little basket cases in their own ways, and while I saw the conclusions of their characters coming from pretty much the moment they were introduced, I did really enjoy them. I also really liked Elijah, the other end of the love triangle Brooklyn finds herself entangled in. (Though, honestly, for a couple chapters there, I thought they might be angling for a love triangle between Gavin, Brooklyn, and Hope. Ah, well. Missed opportunity, I guess.)

THOUGHTS ON WRITING STYLE: The problem with reviewing series is that sometimes, things can get a bit repetitive. I'll keep this brief -- there's no real step up or step down from Vega's previous writing style. She's still great, and very engaging. And, as mentioned above, the fact that she managed to keep tension high despite the reader knowing how the book will end is quite impressive.

THOUGHTS ON POLITICAL STUFF: I've already discussed my mixed feelings towards this series' take on religion, so I'll let that rest until something new comes up in future installments. For now, let's just say: it's complicated. In terms of representation, this is a bit of a step down -- there's only one POC in the book, and she's not the lead, the way Sofia was in the previous books. I also take slight issue with the way abuse is portrayed in the book. At first, it seems to handle it very, very well, but the problem when you have demonic possession in your book is that sometimes, messages your book sends about the evils humans can do unto each other without demonic influence can get... mixed. If you just take it as a story, it's fine -- it's not overtly problematic, and it avoids falling into a lot of common, sexist traps that a lot of horror stories do. But if you read too deeply into it (as I tend to), it can get a bit... icky. Without getting too much into spoilers, I will also warn you that incest is brought up in one character's backstory -- we don't see anything, and it's not described in great detail, but tread lightly if you're worried about it.

FINAL THOUGHTS: Overall, a huge improvement from The Merciless II, one that's left me eager for the next book. I really hope any future installments manage to meet or even surpass the awesomeness of the first book, but for now, I'll settle for "nearly as good." I hope more people discover this series soon, because it's really great, especially if you enjoy a good twisted tale of human morality.

Thanks so much for reading this review! If you've read The Merciless III, tell me what you thought down in the comments below!

If you enjoyed this review, why not support me on Patreon? Patrons get to vote on what books I'll read next in polls like this one HERE, and get more rewards detailed on my Patreon page. If you can't become a Patron, you can also make a small, one-time donation by buying me a coffee. Even if you can't donate, I hope you'll subscribe to this website by using the "subscribe by email" gadget above. Thanks!
Posted by Susan Mesler-Evans at 5:08 PM