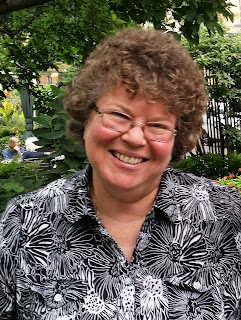 E.D. Baker was born in Buffalo, New York and grew up in a suburb of Buffalo with her parents and older brother.  She earned her BA in psychology from Allegheny College and her MAT from Johns Hopkins University.  Elizabeth has three children and two grandchildren.  She currently lives with her family and way too many animals on a small farm in Maryland.  Her first book, The Frog Princess, was loosely adapted into Disney's movie, The Princess and the Frog.  Since then she has written nearly thirty books, some of which will be coming out next year.

What's the hardest part of the writing process?

Your books have a strong fairy tale motif. What is it about this genre in particular that appeals to you?

The endless possibilities, the ability to make up my own rules about magic and the chance to let the pages take me on glorious adventures.

What's your favorite book that you have written, and why?

I've been working on a particular book off and on for a few years now.  I've rewritten it five or six times, but I like the story so much that I'm willing to keep rewriting it until it's just right.  I also really like a science fiction book that I've written for a slightly younger age group.  The one that will always hold a special place in my heart, however, is Dragon's Breath.  It had just come out in galley form when I went to sit in the hospital with my mother before she died.  I read the book to her, even though she was unresponsive the last few days.  She had liked the beginning and I hoped that she was still able to hear it at some level.

Did you always intend for The Frog Princess to have sequels? If not, what made you decide to continue the story as a series?

When I wrote The Frog Princess I thought it was going to be a single book, not part of a series, but when I finished it I started to think about what would happen next.  My editor asked if I'd be interested in writing a prequel, but I said I had a sequel in mind – Dragon's Breath.  I eventually did write the prequel – The Salamander Spell.

Who is your favorite character in the Tales of the Frog Princess series, and why?

Emma because she's strong, resourceful and brave.  She isn't extremely beautiful or graceful, but those weren't the qualities that really mattered.

What made you decide to continue the Tales of the Frog Princess series after six years?

It was actually my editor's idea as a way to celebrate the fifteen-year anniversary of The Frog Princess.  When I thought about the series, I realized that there was a story that would fit perfectly.  I had a great time writing it and revisiting my old friends in Greater Greensward.

What fairy tales would you like to adapt or reimagine in your future works?

I'm not sure yet.  I collect books of old fairy tales and have found inspiration in a few of them. Nothing solid yet, but then I already have a lot of other stories in my mental line-up.

Dragons, definitely.  If I could be a fantasy creature, it would be a dragon.

I've tried writing with and without outlines, but I've found that the more pre-writing I do, the easier it is to write a story.  I not only do outlines, I also create timelines, character studies and maps before I begin the actual story.

What was it like when you first got published?

Nothing changed, really.  I was super excited, and so was my immediate family, but it was a while before being an author made a difference in my life.  The Disney offer was exciting, of course, but that didn't happen until months later.  It took years before they made the movie, and then it had very little to do with my book.

If you could have lunch with any three authors in history, who would you choose, and why?

What's your advice for new writers?

Be persistent.  Keep writing even if it's hard to fit it into your schedule, or you don't have a special place to write, or you've gotten countless rejection letters.  You'll never get published if you don't keep trying, and the more you write, the better your writing will become.

Thanks so much to Elizabeth for taking the time for this interview! Tales of the Frog Princess was one of my childhood favorites, so this was a seriously exciting interview for me. If you enjoyed this interview, please take two seconds to subscribe to this website (the box for that is at the top of the page), or become one of my Patrons! You can also buy me a coffee by clicking the button above -- every little helps.

Thanks!
Posted by Susan Mesler-Evans at 8:31 AM