BOOK REVIEW: As Old as Time by Liz Braswell 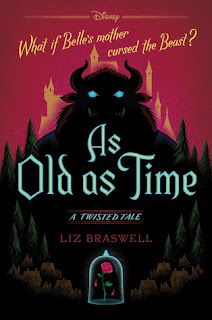 TITLE: As Old as Time

PLOT SUMMARY: Belle is a young woman being held hostage in a castle by a monstrous beast. Yesterday, her biggest issue was being seen as a bit of an oddball. Now, she has bigger things to worry about. But as she gets to know the Beast, Belle realizes he's not as monstrous as he appears, and that he and his servants are all under a curse. Resolving to help, Belle begins searching for a way to break the curse, aided by the Beast. And as Belle digs deeper, she makes a disturbing discovery: the Enchantress that cursed the Beast was her mother.

FIRST THOUGHTS: So if you've been paying even the slightest bit of attention to this blog, you probably know by now that Beauty and the Beast is my favorite fairy tale -- and my favorite Disney movie. I've watched the animated classic more times than I can count, and the 2017 remake is actually one of my favorite films. Ever. So I was really excited to start this book. It was very different from the original film, but in many ways, it felt like visiting an old friend. Every time a line from the original popped up, I couldn't help but smile, and I could almost hear Paige O'Hara's voice in my head whenever Belle spoke. (Though I can't unhear Dan Stevens as the Beast, or Luke Evans as Gaston. Sorry, guys from the original!) It's by no means a perfect book, or a perfect retelling, but I enjoyed it greatly.

THOUGHTS ON PLOT: I'll start off by saying that I am not one to get bent out of shape over plot changes in retellings and adaptations. Like, yeah -- if you totally wreck the meaning of the original or twist it beyond recognition, I'm gonna be a bit peeved. But I also understand that when adapting a story, shit's gonna change. Whether it's a result of changing mediums, changing values, or just because if it were exactly like the original, it'd be redundant, changes are inevitable. And I think the idea of Belle's mom cursing the Beast is cool! I liked how the story built on the original, but didn't disregard it entirely. It provided a compelling backstory, as well as filled in a few plot holes from the original. My only real gripe is the ending -- it wasn't bad, and from a completely new Beauty and the Beast retelling, I would've probably liked it. But since this is a retelling of the Disney version, it felt like a bit too much of a departure, at least to me.

THOUGHTS ON CHARACTERS: I felt like this book really stayed true to the original characters, while at the same time deepening them, taking advantage of having more time than the movie to get to know them. It also introduced some compelling new characters, and developed some barely-there background characters from the original. I especially loved this book's take on the Enchantress, or, rather, Rosalind, Belle's mother. She's not a blameless martyr, but she's also not an out-and-out villain; she's complex, and simultaneously deeply flawed and likable. It also made Belle a little less perfect, and forced her to undergo real character development -- something the original film did not do.

THOUGHTS ON WRITING STYLE: This was, for the most part, pretty well-written. It expanded on the world of the original film, while still being very much its own animal. There were some minor pacing problems, and a few grammar errors that bugged me, but nothing too major. Some, I know, may take issue with a good chunk of the dialogue being lifted from the movie, but honestly, that was part of the appeal for me. It left just enough intact that it felt very familiar, but changed quite a bit, keeping us all on our toes.

THOUGHTS ON POLITICAL STUFF: Like many other fairy tales, this is a very white, very straight book -- which makes sense, seeing as how it's an adaptation of a very white, very straight movie. That said, it does hold the feminist themes of the original, and none of the female characters are forced into stereotypical roles, so that's a plus. There's also a very deliberate racial/religious persecution metaphor with the way magical people are treated in the story. I'm of two minds about that, just as I usually am with these things. The pro-tolerance theme is admirable, but those metaphors always get a bit confused or fall a bit flat when there are no real-world minorities in the fantasy setting.

FINAL THOUGHTS: Overall, while I didn't enjoy this reimagining as much as I enjoyed the original film, or the 2017 remake, I did have a ball reading it. It was a great expansion on the movie I loved as a kid, and I think the premise of the entire "Twisted Tale" line is intriguing. I'll definitely be checking out other titles in the series. It'll be interesting to see how my reaction will be affected when it's not a retelling of my absolute favorite fairy tale.

And I have completed by summer 2017 reading list! I am impressed with myself -- and eager to see what else I can finish before I go back to school. If you've read this book, please tell me your thoughts below!

If you enjoyed this review, please subscribe to this website so you can get updated on when I post new reviews and columns! You can also give me a bit of financial help by either becoming a Patron by clicking HERE, or buying me a coffee by clicking HERE. Every little bit helps! Thanks!
Posted by Susan Mesler-Evans at 8:20 PM