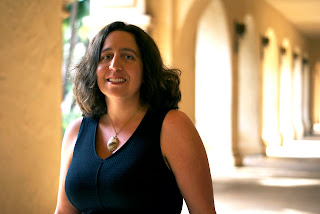 For most of her life Kali Wallace was going to be a scientist when she grew up. She studied geology in college, partly because she could get course credit for hiking and camping, and eventually earned a PhD in geophysics researching earthquakes in India and the Himalayas. Only after she had her shiny new doctorate in hand did she admit that she loved inventing imaginary worlds as much as she liked exploring the real one. She is the author of the fantastical dark young adults novels Shallow Graves and The Memory Trees, and her short fiction has appeared in Clarkesworld, F&SF, Asimov's, Lightspeed, and Tor.com. She was born in Colorado and spent most of her life there, but now lives in southern California.

What inspired you to write Shallow Graves?

I've always loved stories about monsters and creatures and things that go bump in the night--but most of those stories are about the people who hunt and fight the monsters, not the monsters themselves. I started to wonder what life would be like for those monsters if they were just people like anybody else. Maybe they've got some unique dietary requirements, maybe they've got some odd characteristics that are hard to explain in polite company, but what if they just want to live their lives and work their jobs and take care of their families like everybody does? What if they want to make friends and see the world and not be in danger from angry humans all the time? That's where the idea came from in its earliest incarnation.

I don't have any particular actors in mind, but I would very  much want to make sure the actor chosen was biracial. Breezy is half Chinese, and if it were up to me, my number one priority would be making sure she was played by an actor who was the same. I would also want her to be played by an actual teenager, not a twenty-something pretending to be a teenager, because I think Hollywood's habit of casting much older actors in teen roles can have the troubling effect of helping the audience forget just how young teens are.

Is Breezy based on anyone you know personally?

No, not at all. I don't base my characters on people particularly. They all contain bits and pieces of real people--that's how writers make characters believable. But she isn't anybody in particular. The only aspect of her personality that comes directly from the real world is her love of science, which is my love of science, but that's more because it feels like the most natural thing in the world to me to create characters who are fascinated by the universe.

Your next book, The Memory Trees, is set to be released in October of this year. How would you sum it up in ten words or less?

Which book was more fun to write?

Oh my goodness, Shallow Graves was way more fun and also way easier. There are a lot of reasons for that, very few of which actually have anything to do with the books themselves, and I don't know that it shows in the end.

The thing about first novels is that when we're writing them as innocent baby authors who know nothing of the publishing world, we're pretty much only thinking about the story and why we love it and why we want it out in the world. But second novels are different. Second novels happen when we already know all the ups and downs and pitfalls and agonies of publishing--and we're dealing with them at the very same time as we're working on our second novels. So I would say I had a lot more fun with Shallow Graves simple because I didn't know any better!

Which one was harder to write?

I spent 18 months rewriting and revising The Memory Trees, trying to shape it into something I could be proud of. It was the hardest writing I've done in my life so far. I spent a very long time try to figure out what kind of story I wanted to tell and how to best tell is. I got there in the end, I think, but it was an incredibly difficult process.

You also have a middle grade fantasy novel set to be released in 2018. How is writing middle grade different than writing YA?

I honestly don't approach writing middle grade all that differently from writing YA, except to watch my language a bit more and try to steer myself away from my darker, gorier impulses. (There may have been a moment in an early draft when my agent told me I couldn't put a giant pile of corpses in a middle grade novel. That might have happened.)

But a lot of those differences are also in the nature of the story. City of Islands is a fun, fantastical adventure with sea serpents and magic and pirates, so a lot of the work I did to make it age-appropriate was along the lines of making sure it was full of the right kind of action and character moments to appeal to readers in that kind of story.

Which do you prefer?

I don't really have a preference in terms of what I like writing overall; it's more about what I feel like at any particular time. I also write for adults--I've published several short stories in magazines that have largely adult audiences (although there's no reason teenagers couldn't read them)--and most of what I write tends to be toward an older audience.

But I had a lot of fun writing for a middle grade audience, and I very much plan to do more in the future. It's a decision that comes more from the story itself than from any preference I have for readers. I think about what kind of story I want to tell, who the most interesting character is in that story, and who that character would most appeal to. Sometimes that's teenagers, sometimes it's adults, and sometimes it is very much younger children.

I never used to. I was the ultimate extreme seat-of-the-pants writer. But then I went through the aforementioned 18-month-long revision agony with The Memory Trees, and I realized I never, ever wanted to go through a process like that again. So with the next book I wrote, I spent a lot more time thinking through the sequence of events, why people were doing what they were doing, what needed to happen to get where I wanted the story to go. It wasn't a detailed outline, but I did plan a lot more than I've ever done before. I guess I'm somewhere in the middle, in that my instinct is still to charge ahead willy-nilly, but I am coming around to seeing the advantages to having a plan.

What was it like when you first got published?

Exhilarating, exciting, terrifying, and exhausting. There is so much build-up to the release of a first novel that it is emotionally overwhelming, and then there is a bit of a roller-coaster drop when you realize the entire world has not changed with the advent of your book.

Most of all, there was a bit of an adjustment period when I had to remind myself why I was doing this whole being-a-writer-thing, because it can't be about the initial flurry of excitement and expectation. It took me a bit to realize it was so much more important to remember the love of stories, love of writing, love of connecting with those readers who are touched by the story. I think that's a process many authors go through with their first book, because the hype and activity surrounding publishing is not the same thing as the joy that comes from writing, and separating the two takes some practice.

I know that makes it sound a bit like I didn't enjoy it, which isn't true at all. It's still about the most exciting thing in the world! But I also think it's important for authors to talk about the emotional downs as well as ups, because it's not healthy to go around pretending to be thrilled all the time when we're in such a challenging and unpredictable line of work.

If you could have lunch with any three authors in history, who would you choose, and why?

Douglas Adams and Terry Pratchett for the inevitable laughs and insights, and Octavia Butler to blow all out of minds with her brilliance.

What is your advice for new writers?

Nobody is ever going to give you permission to write what you want to write, so you have to give it to yourself. You may be thinking, "I have this idea that is burning a whole in my heart and I want to write it with all my soul, but nobody is interested in reading it." And maybe that is true. But if you're waiting for somebody to tell you, "Yes, I am interested. Yes, I think it is worth you cutting down on your social life to write. Yes, I think it is worth the risk. Yes, that is the exact story I want to hear," you're going to be waiting for a long time.

The best stories we all have inside us are the ones nobody expects, and the writers who find success--which can be defined in many different ways--are the ones who forge ahead into the uncertainty rather than letting it stop them.

So I guess my advice can be summed up like this: Stop waiting for somebody else to tell you it's okay to write. Just write. And keep writing. Don't stop.

Thanks so much to Kali for taking the time for this interview! If you enjoyed this interview, please take two seconds to subscribe to this website (the box for that is at the top of the page), or become one of my Patrons!

Posted by Susan Mesler-Evans at 9:00 AM