OwlCrate is a monthy subscription box where you get sent a new YA book and all sorts of cool merch and goodies, all pertaining to a certain theme.

This month's theme was MAKE IT OUT ALIVE! Here's all the stuff I got in my box this month. If you want to sign up for OwlCrate, their website is here. 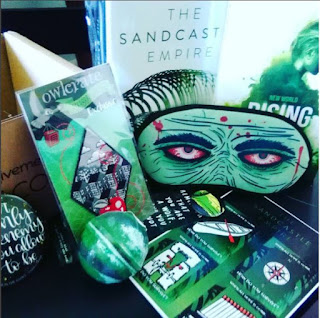 There's also a card with a preview for next month's theme -- WANDERLUST. Can't wait!

Please consider supporting me on Patreon.
Posted by Susan Mesler-Evans at 12:30 PM