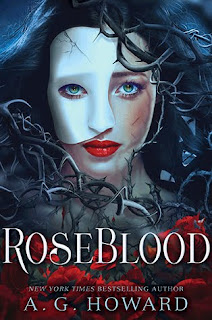 SUMMARY: Rune is blessed with one of the most beautiful voices of anyone that's ever lived, but cursed with an affliction that causes her to be unbearably ill after every performance. Convinced that some artistic focus is the solution, Rune's mother ships her off to a French boarding school. There, Rune's life begins to mirror that of Christine Daaé, the heroine of "The Phantom of the Opera." Rune soon begins to question everything she knows. Is the Phantom real? And if he is, why is he interested in her?

WHY I DIDN'T FINISH: I wanted to like this book. I really did. At first, I even enjoyed it, though I realized within the first chapter that this book was not great literature. But that in itself is okay -- the original novel isn't, either. I thought this would be a fun, guilty pleasure book, and at first, it was. But then, the cracks got too big to ignore. First of all -- Rune is half-Romani, but the author always describes her as a g*psy, which, as many of you probably already know, is considered a slur when used by anyone who's not Romani themselves. (Which A.G. Howard isn't -- I checked.) And it's not just the use of an outdated term, for which I could've been willing to give the author the benefit of the doubt, since the fact that g*psy is a slur isn't as widely-known as it should be. (The word "gypped" comes from that slur, by the way, so it's probably best to not say it. The more you know.) There's also a lot of talk of curses and magic and (and this is a direct quote) "cursed g*psy blood." I wish I were kidding. It was a real disappointment, since I've never seen a Romani character in YA fiction before, let alone in a leading role -- it's a shame her heritage got reduced to ugly stereotypes. (I always say that being white is no excuse to not have POC in your book, but seriously, if you're going to stereotype and not do your homework, don't bother.)

And that was far from my only issue with this book. I could go into how the supernatural elements felt forced and totally unnecessary, or how certain parts felt a bit slut-shamey, or how the worldbuilding felt confused and only half-explained. But what I want to hone in on is how it kind of fucked over Erik. This isn't just a retelling of "Phantom." It is established that the "Phantom" story we know did happen in this universe, and this is a continuation. So when Erik is trying to lure Rune down to his lair and do basically the same shit he did when Christine was alive, it completely destroys his character development. In the original story, Erik lets Christine go at the end, having finally realized that to truly love someone is to put their happiness before yours -- and that terrorizing the opera house, killing Raoul, and forcing Christine to marry him won't allow her to be happy, or him either, really. When he lets her go, he finally stops being a bad person. Maybe he's not a good one, but he's not inherently evil, and him letting her go shows that. So to have him trying to kidnap Rune (or worse) and essentially gaslight her to get what he wants fits with his character... at the start of the original novel. Afterwards? Well, I guess we're supposed to draw the conclusion that Erik didn't really change, and has in fact learned nothing. Which completely misses what makes him such a fascinating character. Yeah, Erik has done some awful, awful things, but he is, at his core, undeniably human. This book completely misses that. It would've worked much better as a modern-day retelling rather than a continuation. (Without the racism.)

(Also, having Erik be a supernatural immortal creature that has to feed on the life of others is just lame.)

Please consider supporting me on Patreon.
Posted by Susan Mesler-Evans at 10:21 AM