BOOK REVIEW: Everything, Everything by Nicola Yoon 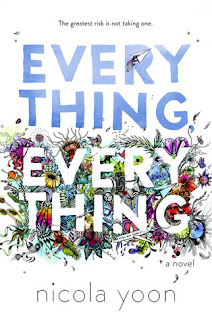 PLOT SUMMARY: Madeline is allergic to everything. Literally. Born with a rare disease, anything could send Madeline into a life-threatening illness. She cannot leave her house, and rarely sees anyone besides her mother/physician, and her nurse, Carla. She isn't too upset about this, most of the time. It's hard to miss something you never had. But then, a family moves in next door, and the teenage son, Olly, takes an interest in Madeline. Texting and emailing in secret, Madeline and Olly develop a quick and intense friendship, and for the first time ever, Madeline begins long for the outside.

FIRST THOUGHTS: This is a very, very popular book, and a movie based on it is coming out soon. I'd been meaning to pick it up ever since it was first released, but I only just got around to it. I read this book in a single day, which seems to be a common occurrence among readers. I'll admit this isn't the most subversive or unpredictable story ever, but I really enjoyed it, and it got me hyped up to see the movie. It's a sweet love story with an unusual set of circumstances for our protagonist, and I had a good time reading it, despite its issues.

THOUGHTS ON PLOT: I love the initial setup -- it provides an obstacle for our couple without resorting to the usual stupid "will they or won't they" crap. The story is very fast-moving, and it's a very, very easy read. It's also incredibly addicting; I actually stayed up late to finish it. The love story feels believable, and the world Madeline and Olly are in feels very, very real. There's also a twist ending, which I have mixed feelings about. It isn't foreshadowed all that well, and it feels a little tacked on, just so there can be a happy ending. But the reveal is written pretty well, and it doesn't handwave the consequences of the twist, so that's a plus.

THOUGHTS ON CHARACTERS: I really love Madeline as a protagonist. She's kind, strong-willed, intelligent, and optimistic, but understands the reality of her situation, and does the best she can with what she has. It was really fun to see her grow and develop as a person, and how she changed through her relationship with Olly, but wasn't defined by it. I liked Olly, too, and he was much more well-developed and likable than the average YA boyfriend. I sort of wish I could've seen him interact with someone besides Madeline -- I think more facets of his personality would've come to light if he had. I also really enjoyed the side characters of Madeline's mother, and her nurse, Carla. Both women care very deeply for her, but it manifests in vastly different ways, and it was really interesting to see how Madeline interacted differently with both of them. It's a small cast, but a strong one.

THOUGHTS ON WRITING STYLE: This book is told in a combination of regular narration, emails, IMs, drawings, and other notes and "snippets" from Madeline's life. This keeps things from getting too monotonous, and also provides a nice little look into Madeline's world. The prose is also great, and manages to illustrate the life Madeline's living without getting too infodumpy. I also really enjoyed reading the IM conversations between Madeline and Olly -- they felt very real, like something two teenagers would actually write to one another. The dialogue was also very well-done. Each character had their own unique voice, and it was always easy to tell who was talking -- no one blended together or got mixed up in my head.

THOUGHTS ON POLITICAL STUFF: First, the positive. This book has a biracial lead (half-Japanese, half-black), and features an interracial couple. There are also several POC side characters, including Carla and Madeline's mother, and a gay character who is closeted but not shamed for it. Yay! However, this book has had... mixed reactions from the disabled community. Some have said that they don't like the notion that Madeline's being forced to live her life in a very restricted way with very real limitations is simply her existing, not really living -- the implication that people who can't do as much as others due to their health aren't really "alive." That's... a really good point. I know parts of the disabled community take umbrage with the twist I mentioned earlier, too. I'm not disabled myself, so it's not my place to judge, but I will say that while I still enjoyed the book greatly, I can't deny that the implications are a tad... unfortunate.

FINAL THOUGHTS: This book is by no means perfect, but it's a very well-written and engaging love story, and great for when you want to kill an afternoon reading. I'm eagerly looking forward to seeing the movie. (Especially because, hello, Amandla Stenberg!) I'd recommend it to anyone who's a fan of YA contemporary, or for people who are looking for a romantic drama that isn't a goddamn love triangle.

Thank you so much for reading this book review! If you've read "Everything, Everything," please tell me your thoughts below. And are you planning to see the movie, too?

Please consider supporting me on Patreon.
Posted by Susan Mesler-Evans at 12:52 PM