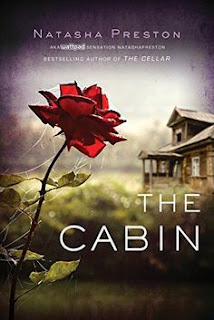 PLOT SUMMARY: Mackenzie is ready to cap off the summer with a weekend at partying at a remote cabin with her six friends. (Or, more specifically, her four friends, a guy nobody really likes, and the guy's brother, for some reason.) But when she comes downstairs to find her best friend and her boyfriend dead, suspicion turns to the five survivors. Half the town is convinced either Mackenzie or one of her dearest friends is a murderer, and she's forced to take matters into her own hands to figure out who's really responsible.

FIRST THOUGHTS: This might be the worst book I didn't actually DNF. Wait, no, I should open with something positive. This book was... short. It was definitely short. As a mystery, this book was lame and stale. As a story, it was unsatisfactory and, in some parts, kind of offensive. (I'll get to that soon enough.) The only reason I didn't DNF it is because it's incredibly addicting. It's like literary heroin; you know it's awful, but once you start, you can't stop. (Hey! That's two whole positive things! ...Sort of.)

DISCLAIMER -- I NORMALLY TRY TO KEEP MY REVIEWS SPOILER-FREE, BUT THE THINGS THAT PISSED ME OFF SO SEVERELY ABOUT THIS BOOK ARE SLIGHTLY SPOILERISH. IT'S A TERRIBLE BOOK ANYWAY, SO WHO CARES?

THOUGHTS ON PLOT: Yeah, this is a pretty basic and typical mystery setup, and don't expect any new and innovative ideas thrown in. It's lame cliche after lame cliche. There's even a Pretty Little Liars ripoff in the form of creepy text messages! And don't even get me started on the romantic subplot. It is one of the most groan-worthy insta-love plots I've ever seen. (Seriously, I actually, literally groaned aloud.) The protagonist meets her love interest for the FIRST. TIME. EVER. in the first chapter, and they're making out by the second. Not that instant attraction never happens -- Lord knows it does. I wouldn't have even minded them getting together so early on, but the protagonist is head over heels for a guy she barely even knows, and is willing to risk her life for the guy, when she's known him for all of two weeks. She also repeatedly insists that he can't be the killer, because she slept with him, and she "would not get intimate with a killer." (Direct quote.) Honey, that's not love. That's lust. The ending was something else that elicited a literal groan. I didn't see it coming, but that doesn't make it good. It just felt like a cheap twist to add shock value.

THOUGHTS ON CHARACTERS: The key word here is "one-dimensional." I will admit that I could keep all the characters straight, but they were all defined by one or two characteristics -- especially our lead, who is one of the most boring mystery protagonists on God's green earth. Mackenzie was completely dull and had basically no personality of her own, her love interest Blake came off as insufferable, and the other four survivors were all bland and unlikable. The murderer turns out to be pretty awful, for different reasons -- see the political stuff section below. The two murder victims were also completely impossible to care about. One was meant to come off as an ass, so everyone had a motive, but the other, we're supposed to care she's gone. But we don't, because we really only know what other people say about her. And that's another thing -- we're frequently told this character is protective or that character is loyal, but we never see it. The only other character of note is the detective inspector who's investigating the murders, and suspects Mackenzie. He's a ripoff of every "eccentric detective" stereotype on TV, and it's ridiculous. I have a feeling he's supposed to be and it's supposed to be funny (and it is kind of satisfying when Mackenzie exasperatedly calls him out on his shit), but mostly, it just feels lame and forced. He was more memorable than everyone else, though, I'll give him that much.

THOUGHTS ON WRITING STYLE: Nothing too exciting or worthy of mention here. She could spell and use grammar, at least, and I suppose the prose wasn't awful. It was addicting, as I already mentioned. But mostly, it just felt flat and easy to skim, and I also spotted some continuity and minor grammar errors that sneaked their way past the editor. I understand that it happens sometimes, and in a better book, I'd be willing to forgive it. But this is not a better book.

THOUGHTS ON POLITICAL STUFF: ...Hoo boy. I could start with how there are no diverse characters in this story whatsoever. Or how it treats having an abortion as some great moral failing that is to be Regretted and Angsted Over Forever™. Or how it manages to have a bisexual character without ever once using the word "bisexual." Or how all the female characters seem to be defined by their relationships. Or how it's revealed that one character once spiked another's drink so they could have sex with them, and this is never once referred to as what it is: rape. (I shouldn't have to say this, but kids -- a "yes" that can only be given with the assistance of booze or drugs IS NOT A "YES." Only a "yes" freely and consistently given.) I COULD GO ON. But what I really want to hone in on is this book's use of the Psycho Lesbian trope. Essentially, it's exactly what it sounds like -- when a woman who is attracted to other women is portrayed as evil, unhinged, dangerous, and predatory. Her homosexuality (or bisexuality, or whatever) makes her "crazy," and her "craziness" makes her evil. So it manages to pull off that fun little trick of being homophobic and ableist in one fell swoop! This trope has been around since fiction was allowed to acknowledge that gay people exist, and fortunately, it's dying. Unfortunately, it is a slow, slow death. That's not to say no lesbians in fiction can ever be villainous, but it's definitely not okay to have only one gay character, and for that character to just so haaaaaaappen to be the bad guy. And gay women in particular get a bad reputation for being predatory towards other women -- and the character in this book fits that stereotype (that harmful, untrue stereotype) to a tee. She's the drink-spiker I mentioned earlier, and her attraction to another woman is what drives her to do evil, unforgivable things. The fact that she's gay is clearly treated as being outside the norm, and her "deviance" adds to her villainy. Her attraction to women is what makes her threatening and scaaaary, both directly and indirectly. Now, I could understand if this book was written in the 80s or 90s -- values change over time, and it wasn't that long ago that the use of this trope is 100% the norm. It wouldn't be okay, but it'd be understandable. But this book was written in 2016. There is NO. EXCUSE. The book tries to make it seem like Mackenzie isn't judging her at all for her sexual orientation, and maybe Mackenzie isn't -- but the author certainly is.

FINAL THOUGHTS: Don't waste your time. On the bright side, this book got me fired up enough that I'm probably going to write an article about the Psycho Lesbian trope soon. So... yay? Actually, no. No yay. This book sucked.

Wow. Have not hated a book this much in a long time. At least writing this review was cathartic.

If you enjoyed my bitching and would like to hear me bitch more in the future, consider supporting me on Patreon! Patrons get to vote on what articles and reviews I write next, in polls like this one HERE. Even $1 a month is a HUGE help to me.
Posted by Susan Mesler-Evans at 1:06 PM