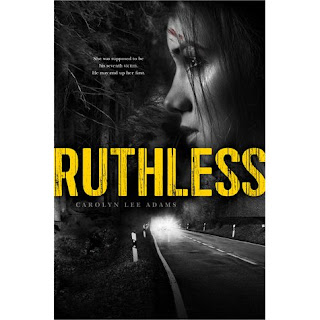 PLOT SUMMARY: Ruth Carver is competitive, aggressive, and sometimes downright mean. But now, these qualities are all she has to rely on in order to survive. Kidnapped and held hostage in the middle of the woods by a serial killer, Ruth knows that if she fails to keep her wits about her and escape, she'll be the seventh of the Wolfman's victims. She manages to escape his cabin and into the woods, but that's when the real fight for survival begins. The Wolfman has a gun, a vast knowledge of the woods, and a desire to see Ruth dead. All Ruth has is her determination to survive. But maybe that's enough -- if there's one thing the Wolfman should know about Ruth, it's that she refuses to lose.

FIRST THOUGHTS: I devoured this book. Almost literally -- I read most of it in one sitting at work, and then read the last thirty pages or so when I got home. While this book isn't perfect (more on that below), this is a book that feels like it was tailor-made for me. I love a good survival story, and well-written thrillers are hard to find, especially in the YA sect. This novel has some blood-pumping action, as well as a very tense, very uneasy atmosphere as Ruth tries to find her way out of the woods before the Wolfman can catch up to her. From the very first chapter, I was totally hooked. The entire story is like a car crash -- it's unpleasant and ugly, but you can't look away. And with a writer this good, you don't want to.

THOUGHTS ON PLOT: So if you know me personally, you know that I LOVE thrillers and survival stories, and I especially love plots that pit a relatively ordinary person against an extremely dangerous killer. Naturally, when I saw this book at the bookstore, I just had to have it. The story starts by dropping us right at the start of Ruth's nightmare, which I liked -- the exposition came gradually, instead of all at once, and it didn't waste any time getting to the bit that made me buy the book. The plot is fast-paced and intense, and keeps the reader guessing and genuinely worried about our main character as she spends longer and longer out in the woods. The only reason that I didn't give the plot a perfect ten is because it falls into the common trap of adding an unneeded romantic subplot. And, unlike other books I've read where that's happened, the subplot didn't really add anything to the story, and it felt incredibly forced. Like, the idea of Ruth realizing she didn't treat her friend Caleb very well and using her need to make it up to him as a motivator? Great. Awesome! Good character development! But why couldn't they have just been friends? Like I said, the romance between them felt very, very forced; in fact, I kind of suspect it was added in at the last minute during editing rather than being present at the start. It wasn't nearly bad enough for me to stop reading, obviously, but it did get aggravating.

THOUGHTS ON CHARACTERS: OK, I love Ruth. I feel like a lot of writers feel like in order for a female character to be a badass, she has to be an emotionless, stoic robot who broods in between killing things. But Ruth isn't like that. It is so refreshing to have a YA protagonist that has an edge to her while still being emotional, likable, and very human. She's also not all sweetness and light; sometimes, she can be a downright bitch. But it never goes too far; she's mean in the way that a lot of real teenage girls are. She's not intentionally malicious, she just doesn't always think to spare someone's feelings. I'm of two minds about the book's antagonist, the Wolfman. On the one hand, he is a genuine threat, and he feels like a very realistic bad guy, one that could actually exist in this world. On the other hand, he's not very interesting. We find out his backstory and even get his insight on some things, but he doesn't have very much character depth beyond being an obstacle for Ruth. There are some side characters that are also pretty one-note, but it's not as bad in their case, since they don't effectively share the spotlight with our protagonist. For the most part, this book is all Ruth vs. Wolfman, and while Ruth is more than enough to carry the story, I would've liked to see a bit of depth as far as the Wolfman is concerned.

THOUGHTS ON WRITING STYLE: I think Carolyn Lee Adams is a very talented author, and it shows in this novel's prose. It never goes too overboard with its descriptions, but still provides a very clear picture of what's happening, and it's all believable as what's going on in Ruth's head as she tries to survive. My only real complaint about the novel's writing is the flashbacks that are intercut in between chapters. Don't get me wrong; I love flashbacks, especially when they provide backstory, which these did. But for some reason, the flashback portions of the book just dragged for me. The ones focusing on the Wolfman usually held my attention, but the ones focusing on Ruth, I tended to skim over so I could get back to the main plot. (Odd, considering how much better developed Ruth was as a character overall.) While they did serve as a nice breather from all the action going on in the main story, sometimes they felt more like a distraction.

THOUGHTS ON POLITICAL STUFF: I have mixed feelings towards this story's politics. In fact, it's one of the main reasons it took me longer than usual to write this review -- I have trouble articulating how I feel about it. While Ruth is undoubtedly a strong female lead (and not in that "emotionless killing machine = strong" way that a lot of writers seem to subscribe to), the book does fall short in other political respects. It has no apparent LGBT or POC characters, save for one Native American woman who appears in the backstory. (On the one hand, she exists largely to further the villain's backstory. On the other, she doesn't die or get brutalized, so that's a win.) There's also an uncomfortable moment towards the beginning where Ruth claims she has nothing against "sluts" ... yet she uses the word "slut" in the first place and talks about one girl's sexual exploits in a... not exactly derogatory, but still not-nice way. Of course, this is pretty realistic for the setting and characters, Ruth being a teenage girl out in the boondocks, so I don't really hold it against the author; it's just something to think about. There's also a lot of misogyny coming from the character of the Wolfman, though given what sort of person he is, that's to be expected. Ruth and the reader both know he's full of shit, and Ruth tells him so, which is immensely satisfying to read. There are also mentions of sexual assault and abuse. It's not particularity graphic, but it's definitely there, so proceed with caution.

FINAL THOUGHTS: Overall, while I'm disappointed in the way this book handled certain things, I really enjoyed it. I wish there were more YA books like this out there, but the fact that there aren't makes it all the better when I find them. I'd suggest it to anyone who's a fan of survival horror, particularly stories with a feminist bent. I'm curious to see if the author's written anything else, and if she has, I'll definitely be giving it a look.

Thanks for taking the time to read this book review! If you read the book, too, let me know your thoughts below!

If you have a dollar or two to spare, please consider supporting me on Patreon! Patrons get to vote on what books I read and review next, and will also get early access to new content, and even free books! My Patreon page is HERE. Thanks!
Posted by Susan Mesler-Evans at 11:00 AM