This week's topic was non-written novels!

This was a hard topic to name, but this is about all books that are not 'written' novels! So graphic novels, comics, manga, audiobooks, etc. Shed some light on books in other forms.

As someone who LOVES graphic novels and visual novels, I was excited to take this on! So, let's start the countdown. 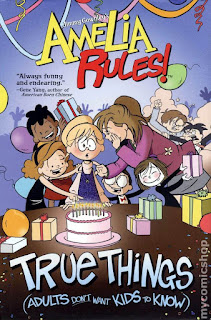 This is one of those series that was near and dear to my heart as a wee Susie, but I never really hear anyone else talk about, which is odd since, by all accounts, these books sold quite well when they were still being published. This was the first graphic novel series I was ever really into, and it was what really introduced me to the medium outside of the comic section in the local newspaper.

The series follows Amelia McBride, an eleven year old girl who's transplanted from New York City to suburban Pennsylvania when her parents divorce and she and her mom move in with her former rockstar aunt, Tanner. Over the course of the series, Amelia and her friends navigate their adolescence in the only way they know how: sarcasm, convoluted schemes, and dressing up as superheroes to pick fights with the local group of ninjas. There are eight books in the series, each covering a couple months of Amelia's life, beginning when she's in fifth grade and ending when she's in eighth grade. For my money, the best book is the third one, "Superheroes," but they're all amazing. They're definitely aimed at middle grade readers, but I'd recommend them to anyone; even now, I still find them hilarious, and the dramatic and sad moments are remarkably well-done. Overall, it's a great coming-of-age story for all generations. 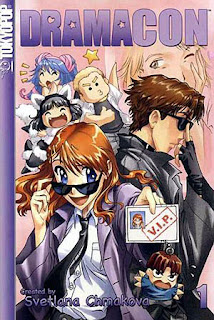 Another throwback to my childhood! "Dramacon" is the very first manga I ever read, and it's one of the few manga series that was originally written and published in English, which makes it much more accessible to Western audiences; it's also set in America, and written with Western tropes and standards in mind. I first read this when I was twelve and on a long road trip, and I devoured all three volumes in one sitting. The funny, fast-paced writing style and light and fluffy nature makes it perfect for some relaxation reading.

The series follows Christie, a perky, cheerful aspiring manga writer who's attending her first-ever anime convention with her artist boyfriend. An argument with her boyfriend over his tendency to hit on other girls leads to Christie storming off, causing her to literally collide with Matt, a sarcastic, antisocial, but otherwise goodhearted con attendee. Despite their initial bickering, Matt and Christie grow fond of one another, and slowly become friends in spite of themselves. From there, we follow Christie as she gets entangled not just with Matt, but with his sister, and other artists, writers and fans she meets at the convention.

There are three volumes in the series, each volume covering one weekend at the annual convention at which Matt and Christie meet. Over the course of three years, we get to see the characters change and grow, and their relationships deepen and grow more complex. It also offers some funny commentary on fandom culture. If you've ever been to a con, you know these people. It's also one of the very few series I've seen that actually does a bad boy properly. Matt's definitely got an edge to him, and he's definitely a "bad boy," but he's not a bad guy. In a world where so many writers think "bad boy" means "abusive asshole," it's refreshing. Matt's many things, but never abusive. If you want to read the series, I'd definitely suggest buying the "ultimate edition." It's got all three volumes, plus quite a lot of bonus content, such as author's notes, fanart, and even a bonus story. It may not be the most challenging or inspired manga, but it holds a special place in my heart, and it's a great read for when I'm feeling down. 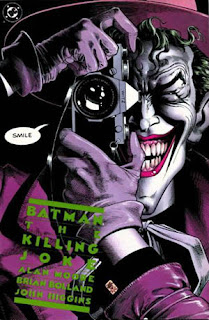 I think that as a die-hard Batman fan, I'm sort of contractually obligated to put this one on here.

"The Killing Joke" provides one of many backstories for the caped crusader's most famous foe, the Joker. As we learn his story, the Joker tells Batman that it only takes one bad day to drive the sanest man alive to madness. He attempts to prove this point by driving Commissioner Gordon over the edge by kidnapping him and brutalizing his daughter. (Nice of him, isn't it?)

I almost feel like there's nothing I can say about this story that hasn't already been said. The art style is phenomenal, and the story, while deeply depressing, is very well-written and intriguing. Whether or not you choose to believe this version of the Joker's history, it provides some interesting background to one of the most famous villains in all of pop culture, and his interactions with Batman in this story are downright heartbreaking in some places, terrifying in others. I won't pretend I don't have a problem with the way women are treated in the story (they only seem to exist to be killed or horribly maimed), but I still enjoy the book wholeheartedly every time I read it. 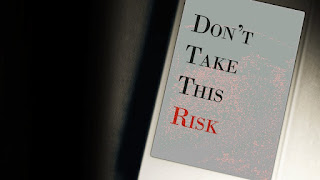 This is a visual novel -- a form of interactive media that's like a cross between a book and a video game. They're usually quite simple to play, and focus more on storytelling than gameplay. Since I love a lot of the storytelling present in video games but suck at actual gameplay mechanics, visual novels tend to be right up my alley.


You play as a nameless young woman who receives a phone call from someone who mistakenly thought your number was the local suicide hotline. From there, what happens is up to you. You can try to persuade the man to call the hotline rather than go through with his plans to kill himself, you can try to hold a conversation with him, or you can meet him face-to-face. Depending on what route you take, you may find yourself dealing with a bit more than you bargained for. It's clear in all routes that the man is deeply unhappy and in need of help, but in some, you find that he's just as much a danger to you as he is to himself.

This visual novel is not what I'd call "fun." It is not. It is, however, deeply thought-provoking, and it definitely warrants discussion. There are nine possible outcomes, none of them particularly happy, and they all depend on one thing above all else: how much danger you're willing to put yourself in to try and help this complete stranger. It's not just a question of if you will do so -- it's a question of if you should. The man is certainly deserving of sympathy, and maybe even guidance, but depending on which route you take, you may find yourself wishing you hadn't taken his call, the more you get to know him. I will warn you right now that this is not for the faint of heart -- besides the heavy themes already mentioned, there's quite a lot of disturbing audio, an incredibly stalker-ish vibe in certain aspects, and the man will go through with it in most routes. This is a story that's equal parts horrifying and heartbreaking, and while I'd recommend giving it a look, I would not recommend playing it when you're home alone at night, as I stupidly did. 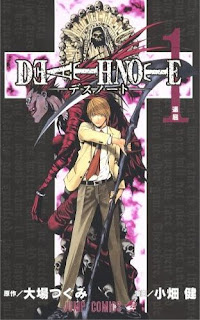 Often considered to be one of the greatest manga series of all time, "Death Note" has spawned an anime adaptation, multiple movies, a TV drama, a stage musical, a couple spin-off books... even an upcoming Netflix adaptation! (Which cast a white guy as the lead character despite him being explicitly Japanese, because Americans be ruining everything.) Even if you don't consider it to be one of the greatest, you can't deny it's one of the most popular. And I, being my basic-ass self, rank it at the top of my list.

For any of my readers who aren't much into anime and manga, I'll give a quick rundown of the plot. Light Yagami is a brilliantly intelligent, handsome, charismatic young man with three major flaws: his borderline-suicidal boredom, his rather immature view of justice, and a raging god complex. When he finds the Death Note, a notebook that can kill anyone simply by writing down their name, he declares himself Kira, god of the "new world," a world that will exist without criminals. Of course, people notice when criminals start dying in droves for no reason, and the police force brings in L, a reclusive genius detective, to catch Kira. From there, things get complicated. There are plans, deception, and internal monologues. And apples. Lots of apples.

While I will be the first to admit that the series can get too much hype, and that certain parts of its massive fanbase can be kind of annoying, I still hold that "Death Note" is so incredibly popular for a reason. Its characters are incredibly memorable, and the battle of wits between Light and L is ceaselessly entertaining -- no matter which side you root for. L is one of my favorite fictional characters of all time, even if I do want to smack him upside the head about 75% of the time he's talking. (Fun fact: the manga's creator based him off of Batman!) The manga isn't too long, running for 12 volumes (believe me, for manga, that's short), and even if you're not into graphic novels, the anime is a very faithful adaptation. (Some people swear by the original Japanese cast with English subtitles, but personally, I'll take the English dub any day of the week. ...Please don't kill me.) If you like a dark story with lots of twists and turns, and characters you're not sure if you can side with, I urge you to check it out. Like I said: one of the most popular manga series of all time for a reason.

Thanks for reading! If you have any favorite "non-written" novels, please, share them below!

Please consider supporting me on Patreon.
Posted by Susan Mesler-Evans at 2:00 PM