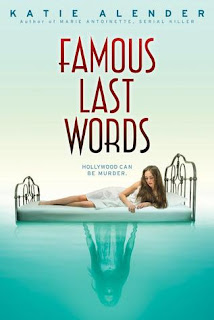 PLOT SUMMARY: Willa has been transplanted from Connecticut to Los Angeles when her mother marries Jonathan, a successful director. Still reeling from the death of her father two years ago, this would already be a trying time, even without her strange visions. But Willa does have visions -- visions where she becomes a murder victim in their last moments. As she tries to settle into her new life, Willa realizes that her visions may have something to do with the Hollywood Killer, a serial killer that's been terrorizing Los Angeles, recreating famous movie death scenes with young, up-and-coming actresses. And now, Willa's seeing even stranger visions in her new home -- which an old Hollywood starlet is rumored to have died in year prior, by the way. She's seeing writing on the wall, dead bodies in the pool, and a second reflection in the mirror. Who is the ghost that's haunting her, and what are they trying to tell her? Could it have something to do with the Hollywood Killer? Like, for instance... is she next?

FIRST THOUGHTS: This is a book that would've been very, very easy to write poorly. There are plenty of "gotta catch the killer before he gets me next" stories out there, and the vast majority of them are... underwhelming, or at the very least convoluted. This book, however, was neither. I read it in two sittings (granted, those two sittings were about two months apart because reasons), and while it's not a challenging book, it is a compelling one. It benefits from likable characters and high stakes, and manages to work in its paranormal angle remarkably well. The novel isn't the most thought-provoking or challenging, but I liked it. It's a good read for when you're looking to lose yourself in an adventure, and face a bit of danger on the way.

THOUGHTS ON PLOT: The main focus of the novel is right where it should be -- on the murder mystery. Willa's psychic visions and her researching The Hollywood Killer drive most of the plot, while also tying in quite well with the subplot of her trying to settle into her new life in California. There is a romantic subplot, and what I feared would become a love triangle, but I was pleasantly surprised when it didn't take over everything and distract from the mystery. The romance is also remarkably well-written; it grows slowly, taking its time, and develops naturally, rather than being forced Because Destiny Says So or something. Even if you're completely against romantic subplots in books, I'd still advise giving this one a chance -- even if you don't personally ship it, the couple doesn't detract from the adventure. And the adventure itself is a very good one. All the pieces of the mystery fall into place slowly, and while a couple of the twists are a bit predictable, there was one about halfway through that genuinely surprised me. The climax of the novel gets a little long for my tastes, but it's well-written, and the stakes are incredibly high, so it held my interest for the most part.

THOUGHTS ON CHARACTERS: When I first started reading, I wasn't so sure I'd like Willa. She's a bit antisocial and bratty, and is incredibly morose. But, as you get into her backstory, you realize that she has good reasons for being that way (beyond just being a teenager), and you also find that she has a good heart underneath it all, and the capacity to be very brave and capable. Same with her partner in crime (and lab work), Wyatt. Wyatt's a bit of a jerk, definitely, but he's still likable, and a genuinely interesting character -- his borderline-unhealthy interest in the Hollywood Killer is something a lot of teenagers can relate to, I think. We know it's probably not good to take such an interest in the dark and twisted parts of the world, but we still do it. Wyatt also realizes when he crosses the line, and is quick to apologize and try to make amends, which is what allows him to still be a hero. Wyatt and Willa bring out the best in each other, and work very well as a team. (Once they can stop arguing long enough to do it, of course.) Rounding out the cast is Willa's mother and stepfather, both of whom are mostly delegated to supporting roles, but can provide wisdom or help at a crucial moment, Reed, a charming young man who works for Willa's stepfather, and Marnie, Willa's first (and for a while, only) friend at her new school. Marnie, I feel like was a bit of a wasted opportunity. For the most part, there's not much to her except for being shallow and attention-hungry. There are hints of something deeper beneath the surface every now and then, suggesting that she has a kind heart buried deep somewhere in there, or issues of her own she needs to address, but unfortunately, the narrative doesn't really give her much room to grow or change. (I like to believe that the ending implies she may be learning from the error of her ways, but it's probably just wishful thinking on my end.) There's also a one-scene character, a psychic Willa and Wyatt go to talk to during their investigation, that I wish we'd seen more of. She's mainly there to infodump and push our heroes in the right direction, but she's so laid-back and clever and funny while she does it that I kind of hoped she'd show up one more time before the last page to help save the day. Oh, well -- the one scene she's in is memorable enough. One character that did genuinely surprise me from how well he was executed was the Hollywood Killer himself. His introduction was a big "oh, shit" moment, for both Willa and the audience, but what really surprised me was how well he was written. He wasn't a generic "mwahahaha I'm evil" YA villain, or just unpleasant; this guy is genuinely scary. The more we get to know him, once we actually meet him, the more he creeps us out, and makes us genuinely afraid for Willa. It takes us until almost the end of the book to meet the guy outside of Willa's visions, but once we do, he lives up to the hype.

THOUGHTS ON WRITING STYLE: The writing in this novel is fast-paced, accessible, and very wry -- which makes sense, seeing as how it's Willa's internal monologue. The story's not laugh-out-loud funny, nor is it supposed to be, but Willa's narration does occasionally provide a much-needed sarcastic comment or observation to lighten things up. Not only does it keep the atmosphere from being too "doom and gloom," but it also reflects the character well. Willa uses her wit as a means of survival; at first, just to cope with her grief and get through high school in one piece, but then, just to keep herself sane as her life literally hangs in the balance. The mystery aspect of the novel is also handled very well; we're given enough hints that the reader might piece it together before Willa does, but it's never blatant, and the resolution isn't pulled out of nowhere, either. There were a few lines that, after the big reveal, I looked back on and went, "Ohhhhhhh." And as I already mentioned above, the Hollywood Killer's actual appearance in the novel is genuinely unsettling to read, making the danger feel very, very real.

THOUGHTS ON POLITICAL STUFF: This book falls into a common trap of YA lit. There's nothing overtly racist or homophobic about it -- because there are no POC or LGBT people in the story to speak of. While one could argue that it makes sense that Willa's world would be very white, since she does live in the notoriously white-favoring world of Hollywood, I would argue that it's writers' responsibility to create more roles for POC actors in the first place -- and one way to do that is to write them into your books. To be fair, none of the characters ever have their ethnicity specified in the first place, but that feels a bit like cheating to me. There was also the use of casually ableist language -- the kind that I'm sure the author didn't notice, or intend to come off as offense to anyone. In fact, I wouldn't be surprised if most readers wouldn't notice, either. It was the sort of thing that I myself wouldn't have thought twice about two or three years ago (referring to a neat and organized character as "being super-OCD," for instance), but now that I know better, I notice it and don't like it. That said, I do like the aversion of the "disability grants supernatural powers" trope. (For more on why that's considered ableist, read THIS blog entry by The Bookavid.) Willa is depressed and is implied to have some form of PTSD, and she has psychic visions -- but they're not connected, they just happen to coincide. One character is also revealed to be a compulsive liar, and I have mixed feelings about their portrayal. On the one hand, the character isn't the most pleasant person in the world, and they cause quite a bit of trouble, but on the other hand, their condition is portrayed as not being their own fault, and it's also clear that they're not a completely horrible person -- just prone to selfishness. As for how accurate the portrayal is, I have no idea, having no experience with pathological lying myself.

FINAL THOUGHTS: In spite of the political issues I discussed above, I genuinely enjoyed this book, and the mystery was very well thought out. It definitely makes me want to check out some of the author's other work. (One of which is titled "Marie Antoinette: Serial Killer," so I pretty much HAVE to know.) I'd recommend it to anyone looking for an exciting, fast-paced read, especially to other filmophiles such as myself.

Thanks for reading this review! If you read the book, too, I'd love to hear your thoughts in the comments below.

If you'd like to vote on what books I read and review, consider supporting me on Patreon! My page is HERE.
Posted by Susan Mesler-Evans at 5:18 PM